Are you teaching someone a vital life skill? If so, you could say you “give a man a fish” to describe training them. This post unpacks the meaning and origin of this expression.

This proverbial saying means that teaching a person a skill is of more benefit to them than giving them a hand-out. It’s a way of saying that life skills are important, and without them, we cannot become self-sufficient.

“No problem, I’m glad I could give you the training you need to succeed at the job. As they say, give a man a fish.”

“Give a man a fish and feed him for a day. Teach a man to fish, and you feed him for a lifetime. That’s why I’m teaching you this, son; pay attention.”

“The community center is a vital organization. People go there to learn employment and life skills. Give a man a fish. You know how it goes.” 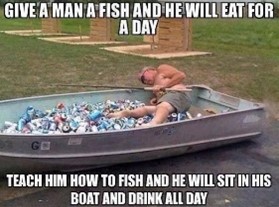 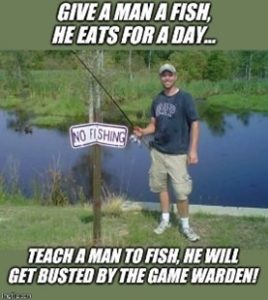 There is some dispute over the origins of this saying. The expression “Give a man a fish” comes from mid-19th century England. Many people think this saying is a Chinese proverb, but they are mistaken. Anne Isabella Ritchie, daughter of William Makepeace Thackeray, wrote “Mrs. Dymond” in the 1880s. The saying appears as follows.

“He certainly doesn’t practise his precepts, but I suppose the patron meant that if you give a man a fish he is hungry again in an hour; if you teach him to catch a fish you do him a good turn.”

The book went into print in 1890, with the story finding its way into print a few years before the publication of her book.

Phrases Similar to Give a Man a Fish

Phrases Opposite to Give a Man a Fish

Ways People May Say Give a Man a Fish Incorrectly

Acceptable Ways to Phrase Give a Man a Fish

You can use the phrase “give a man a fish” when you’re trying to tell someone to put more effort into helping others learn something that can benefit their life.

It’s a way of saying that learning a skillset will reap you rewards in the future. It’s a better move than relying on the generosity or experience of others in the short term for your survival or progress in life.

The phrase suits professional and social use. You could use it at work when you’re talking about training salespeople in the art of closing the deal.

When they learn to close themselves, they don’t need to depend on you, and they can start building their career. You could use it with your friends after teaching them a skill that can benefit their life.