Are you looking for a way to tell someone that they are set in their ways? If they struggle to learn new concepts or don’t pay them any mind, you could say that “you can’t teach an old dog new tricks.” This post unpacks the meaning and origin of this expression.

The expression “you can’t teach an old dog new tricks” refers to seniors stuck in their ways and resistant to change.

“I give up on teaching my grandad how to use the internet and email. Sometimes you just can’t teach old dogs new tricks. He’s set in his ways, and he doesn’t care.”

“Don’t bother trying to teach mom how to use Twitter. Old dogs can’t learn new tricks, and it will just frustrate her.” 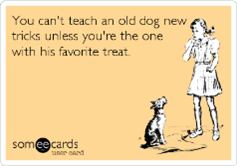 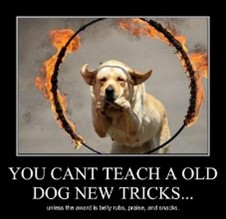 The origin of the expression “you can’t teach an old dog new tricks” comes from the mid-1500s. It’s one of the oldest idiomatic expressions in English, and the original use of the phrase appears in

The earliest use of the expression in print comes from John Fitzherbert, in his book “The Boke of Husbandry,” published in 1534, where it appears as follows.

The saying also appears in “A Dialogue conteinyng the nomber in effect of all the Prouerbes in the Englishe tongue,” published in 1546.

The more modern version of the saying first appeared in print in 1721 in the book “Divers Proverbs” authored by Nathan Baily. While it isn’t the exact version of the modern phrase, it’s very close.

“An old dog will learn no tricks.”

Some people may use the phrase in its literal meaning, referring to their pet. However, it is possible to teach old dogs new tricks as long as you incentivize them. When using the phrase, the “dog” refers to a person, not the animal.

You can use the saying, “you can’t teach old dogs new tricks,” when referring to people set in their ways. They spend a long time practicing their techniques or habits, and they are resistant to change, preferring to do things their way.

The phrase suits social and professional use. You could use it at work to describe a manager’s attitude to running their business or team and their inability to look for a new, fresh approach to problem-solving.

You could use it at home to describe how your grandfather refuses to use the internet. His resistance to technology may come from his lack of interest in learning new things.