Did someone message you on TikTok asking if you want to be their ‘sneaky link?’ What are they asking you to do? Send them a file? This post unpacks the meaning and origin of this viral expression.

The meaning of the expression ‘sneaky link’ refers to the viral video trend on TikTok. Users will post video content about them sneaking behind their lover’s back with a secret side piece that no one knows about.

It’s an incredibly popular hashtag on TikTok and features a sound clip from the original ‘sneaky link’ video. The phrase can refer to homosexual and heterosexual relationships, and it’s usually more common in young people under 25.

If someone is your sneaky link, it means you’re having an affair with them that your partner doesn’t know about, and if they find out, it has bad repercussions for you.

“I love this sneaky link I have behind my partner’s back. He doesn’t have to know anyway. It’s amazing how easy it is to cheat on someone. I’m going to do it more often.”

“I have a few sneaky links in my DMs, and we occasionally like creeping with each other. It’s a great way to freshen things up so I don’t get bored of the girlfriend.”

“I never wear condoms with my sneaky link, and I’m wondering if my partner has this same rash I have? I hope not, or he’ll know I’m cheating for sure.”

“You never know how things will go with a sneaky link. The last thing you need is for them to get possessive and rat you out to your girl.”

“I asked this girl if she wanted to be my sneaky link, and she was all for it. Man, it never surprises me how easy it is to get someone to cheat on their partner.”

“We’re all animals and don’t belong in monogamous relationships. The ‘sneaky link’ trend on TikTok proves that most people are polyamorous.”

“If my girl finds out I’m fooling around with a sneaky link, she’s going to be super upset at me. I better keep this all on the down low, or its going to cost me.” 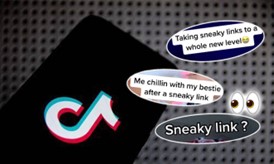 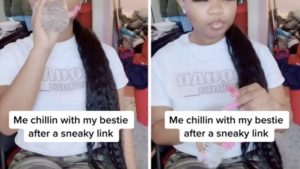 The expression ‘sneaky link’ originates from a viral trend on the social media platform TikTok. It started with the user ‘hxllywood’ posting a video clip featuring him rapping a song with the following lyrics.

“Girl, I can be your sneaky link

Be my sneaky link.”

The soundbite when viral, with other users dropping it in their videos, referencing cheating on their partner. It’s an incredibly successful viral trend, with the #sneakylink hashtag amassing nearly 600 million views on TikTok.

Phrases Opposite to Sneaky Link

Some may think the term ‘sneaky link’ applies to links sent via text messages or emails. However, a sneaky link is someone that you’re hooking up with on the side. They are your side piece, and you do everything to keep them away from people you know.

You can use the expression ‘sneaky link’ when describing someone you’re sneaking around with behind your partner’s back. They have no idea about your side relationship, and you’re doing everything you can to keep it quiet and away from the attention of people that know you. It’s common for people to use the term on social media. There’s a viral TikTok trend on the subject on the platform.

The phrase ‘sneaky link’ applies to young people, typically in the 16-year to 35-year-old demographic. It’s a term more popular with the youth, which is why it features more on TikTok than other social media platforms. You can use the phrase when referencing someone you’re sneaking around with to your friends and people you know who won’t rat you out to your partner.