Are you looking for a way to say you’re moving onto the final stage of a competition? You could use the saying “two down, one to go” to describe your progress. This post unpacks the meaning and origin of this expression.

The expression “two down, one to go” means that you have successfully achieved or taken care of two targets or goals.

It means that you are moving onto the final phase of a project or task, and your prospects for taking out the third look good.

It’s a motivating statement designed to inspire the person with good luck in the third phase of the task.

“That’s two down and one to go. I never thought this game would be so easy. Do you think I’m ranking on the world leaderboard yet?”

“So, that’s two down and one to go. Then we have the entire project finished and ready for presentation tomorrow morning.”

“That’s two down and one to go. These pizzas are huge, and I don’t know if we will finish all of this.”

“All I can say is that’s two down and one to go. Then it’s time to hit the road for spring break. I can’t wait for some sand, sun, surf, and fun!”

“That’s two down and one to go, but I don’t know if getting the third will be as easy as the first two. Let’s hope our experience pays off here.”

“Two down and one to go, Marvin. We’re almost at the end of the workouts for the week, don’t give up on me now, buddy.” 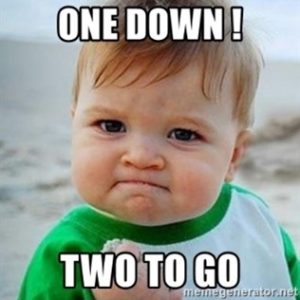 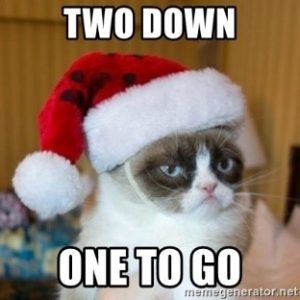 The expression “two down, one to go” comes from golf. Each golf course has a set number of holes with a “par” number attached, saying how many strokes it should take the player to finish the hole.

If players were going to finish in a “birdie score,” they would often need three stokes to get the result. So, they would say “two down and one to go” when they were close to achieving the feat.

An example of the phrase pertaining to its golf origins comes from the Des Moines Daily News, in a piece published in June 1919, where it appears as follows.

“In defeating Walker Jr., youthful star from Staten Island was pushed to the utmost reaching the final hole of the day with the youngster two down, one hole to go.”

There is other evidence suggesting it has a tie to baseball. The Olean Evening Herald published a review of a recent game in June 1922, where the saying appears as follows.

“The visiting Stars again tied the score in the seventh with two down and one to go.”

Phrases Similar to Two Down One to Go

Phrases Opposite to Two Down One to Go

Ways People May Say Two Down One to Go Incorrectly

Using the phrase in any manner that may imply harm to other people is the incorrect use of the saying. While this saying can have a dark meaning of a kill list, it is not the intention of the idiom. Using it in this manner would not be technically incorrect but the least common use of the saying.

Acceptable Ways to Phrase Two Down One to Go

You can use the expression “two down and one to go” when describing how you’ve taken down two targets and you have one more left to complete a trio. It’s a way of saying you are over the halfway point with your task and coming into the home stretch for the finish.

The phrase suits social and professional use. Use it at the office when you’re closing two clients in a row and aiming for a third for a “hat trick” of sales. Use it at home when you put two kids to bed and are getting ready for the third to hit the sack.