Are you looking for a different way to tell your kids to head up the stairs to bed? If so, you could say to them to get up the “apples and pears.” This post unpacks the meaning and origin of this cockney saying.

There are many examples of this rhyming slang, but apples and pears are probably the most commonly known saying internationally. It’s a harmless saying, and it suits lighthearted use with family and friends. You wouldn’t use this saying in professional conversation because people wouldn’t know what you’re referring to, and it’s not suitable for formal use.

“Dear, please run up the apples and pears and grab my jacket from the bedroom; it looks cold out there today.”

“I asked him where he was going, and he just turned around, said nothing, and ran up the apples and pears.”

“You better keep your mouth shut, or I’ll throw you down the apples and pears.”

“Walk across the street to the concrete staircase. Go up the apples and pears, and you’ll see the tube station on your right, guvnor.”

“Alright, everybody, we had our mid-break refreshments. Now it’s back up the apples and pears to your seats for the show’s second half.”

“I’ll just fly up the apples and pears and get my wallet, don’t go anywhere.”

“All right, kids, you had a big day, and it’s time for bed. Up the apples and pears and into the bathroom to brush your teeth.”

“It’s just down the apples and pears and to the right at the bottom of the landing.” 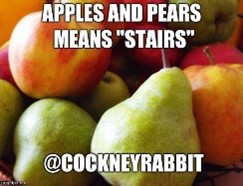 “apples and pears” originates from “Cockney” slang. A cockney is a name given to the people living in London’s East End. Typically, it refers to people “born within hearing of Bow Bells.” This English subculture is famous for using many rhymes in language to depict objects and tasks. For example, “telling porky pies” means that you’re telling lies.

Cockney language is not common throughout England. While some people may understand general terms they hear in media, most of its rhyming slang is only understood by the cockney culture. However, many saying, such as “apples and pears,” made it into English media and US media culture, spreading their use throughout the world.

An example is the movie “Lock Stock and Two Smoking Barrels,” written and directed by Guy Ritchie. The English filmmaker included many cockney slang sayings in the film. As a result of its popularity, the cockney language reached the American market.

Phrases Similar to Apple and Pears

Phrases Opposite to Apple and Pears

The saying “apples and pears” has nothing to do with fruit. If you hear someone say it, they’re not requesting that you bring them an apple and a pear. They want you to go up the stairs.

Using the phrase in reference to any other task is incorrect. Some people may use this expression outside of the UK, where it’s less likely people will understand what you’re referencing.

You can use “apples and pears” in a social situation where you want to tell someone to go up the stairs. Typically, the other person will need to know the meaning of the saying to understand what you are telling them.

The phrase is an original cockney slang, and it doesn’t have much use outside of the UK. People in Scotland, Wales, and Ireland may understand what you’re saying due to the spread of the phrase’s popularity. However, you won’t hear many people in America using the expression.