Do you want to confront someone about something that’s bothering you? You could say you have an “axe to grind” with them. This post unpacks the meaning and origin of this expression.

The expression “axe to grind” means to involve yourself in a dispute with another person over something they said about you or a transgression they made against you. Typically, you feel they treated you unfairly or presented inaccurate information about you to others.

“Hey John, I have an axe to grind with you. Why did you text my girlfriend and ask her out? Don’t you know she’s with me? Or are you trying to catch a beatdown?”

“Listenboss, I have an ax to grind with you. I don’t appreciate you passing me over for the promotion in favor of the new guy. I’m the one with the seniority in the company.”

“Baby, I have an axe to grind with you. You told me your new jacuzzi would affect the electricity bill, but it’s cost me an extra $200 this month.”

“I have an axe to grind with the store owner. He told me this was the best price, but I just found the same thing online for half the cost. I’m not impressed.”

“I have an axe to grind with my fellow band members. I heard they want to replace me with another guy from a different band.”

“You look like you have an axe to grind with me. What’s the problem? Let’s see if we can work it out over a coffee.”

“What’s the problem here? Do you have an axe to grind with me or something? Let’s hear it then.” 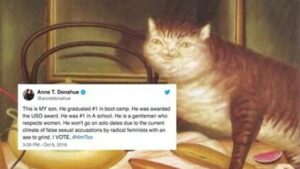 The expression “axe to grind” originates from the first publication of an article in the “The Centinel,” a Pennsylvania newspaper, published on 28th November 1810. The story, written by Charles Miner, was titled “Who’ll turn Grindstone?”

The story was listed as a reprint of an original piece from the “Luzerne Federalist.” The author was a co-founder of the Luzerne Federalist, and his story acts as a cautionary tale of an incident from the writer’s youth.

The author uses “having an axe to grind” as a metaphor for an ulterior motive. It reads as follows.

“When I see a man holding a fat office, sounding ‘the horn on the borders’ to call the people to support the man on whom he depends for his office. Well, thinks I, no wonder the man is zealous in the cause; he evidently has an axe to grind.”

A re-published version of the story in 1812 has the saying appearing as follows.

“When I see a merchant over-polite to his customers … thinks I, that man has an axe to grind.”

Phrases Similar to Axe to Grind

Phrases Opposite to Axe to Grind

The phrase has nothing to do with grinding axes to make them sharp. In this circumstance, the axe is a complaint or problem, and grinding it involves talking it out with the other person.

You can use the expression “axe to grind” in social and professional situations where you want to voice your concern or disagreement with someone you feel did wrong against you. You could tell your friend you have an axe to grind with them after you heard they were hitting on your partner at the club.

You could say you have an axe to grind with your boss after she passed you over for a promotion in favor of a junior associate. The phrase suits text-based communications and verbal exchanges.