Are you looking for a way to tell someone not to jinx you or curse you? Maybe someone’s giving you a bad vibe, or they have such bad luck that you don’t want anything to do with them? If that’s the case, you could say you want nothing to do with their “bad juju.” This post unpacks the meaning and origin of this expression.

The expression “bad juju” means “bad luck” or “voodoo.” It’s a way of describing negative energy and mysticism. Bad juju implies that a person or object is possessed or battling with an evil spirit.

Bad juju can also refer to people emitting a “bad vibe” or people that always seem to have calamities happen around them.

Juju is an African belief system and something of a religious concept. You can use the phrase “bad juju”  to describe unfortunate events or feelings of uncertainty you get from other people.

If someone has “bad juju” around them, it means that you want to steer clear of contact with that individual.

“Don’t put that bad juju on me. I want nothing to do with that. Just leave me alone.”

“It’s like that house has some bad juju going on with it. We walked past it the other day, and I just get a really creepy vibe from that place.”

“Mike is in a bad spot right now. He reckons someone put some bad juju on him, ruining his life. It’s probably all in his head, though.”

“I met this spiritual healer the other day, and we got into an argument. Since that day, nothing has been going right for me. It’s like she put some bad juju on me or something.”

“You need to clear your mind and block out the bad juju from your life. You’re in control over how your mind behaves, not some mystical force.”

“Jim started wearing garlic cloves around his neck to ward off the bad juju. All it does is make him smell terrible. That guy needs to take a bath.”

“If you’re always thinking negative thoughts, you’re sending bad juju and negative energy out into the world, which will become your life experience.” 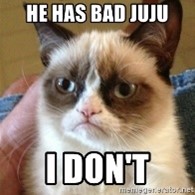 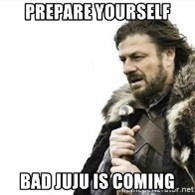 The expression “bad juju” originates from the practice of “juju” or “voodoo” in West African nations like Benin, Nigeria, Ghana, and Togo. Juju is neither good nor evil, but it has good and evil sects that practitioners can use for nefarious deeds or constructive use in their lives.

Since West African nations are largely French-speaking, it would make sense that this is the true origin of the phrase.

There is no information on when the phrase started appearing in English. However, some experts think the saying was around as early as the late 1960s.

Phrases Opposite to Bad Juju

It’s common for people to confuse “juju” with luck. Since luck is a similar mystical phenomenon, it falls into the same category as “juju” and is often confused. Using “bad juju” to describe bad luck is incorrect.

You can use the phrase “bad juju” when describing someone placing a curse on you or acting in a creepy manner that makes you feel uncomfortable. The term suits social use, and it’s a common saying in all age groups and many countries around the world, not just Western Africa.

You can use “bad juju” when telling your friends that someone you met gives you a feeling of evil or anxiety. It’s also a way of telling people not to curse you, such as “don’t put that bad juju on me.” It’s an expression for telling people that you don’t want any interaction with the said person.