Did your favorite rapper just reference a woman as a “redbone” in a track? What does that mean? Is it a racist term? This post unpacks the meaning and origin of this expression.

Rap music popularized the expression, and the person responsible for its first use is an African-American. Therefore it would be incorrect to call it a racist term. However, “woke” people advocate that the term is offensive to African-American women and should be considered hate speech.

“I have a thing for redbone women. I love the color of their skin tone, it looks so exotic, and it drives me wild.”

“It’s interesting that you and your sister are so different. You have a much lighter skin complexion. Have people ever called you a redbone?”

“Do you know what a redbone is? It’s an African-American person with a light, reddish skin tone.”

“My mom is white, and my father is black. People say I’m a redbone because I have a light brown skin tone, but I don’t care what labels they place on me.”

“Why would you call a person a redbone? That sounds terribly racist. I feel like someone should charge you with hate speech.”

“Do you know the difference between a yellow bone and a redbone? The yellow bone has the lightest skin tone of African-Americans.”

“Yellow bone, redbone. It all sounds like a load of racist garbage to me.” 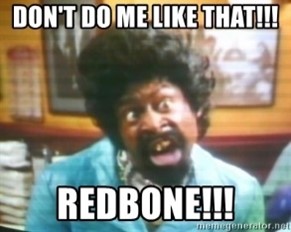 The expression “redbone” originates from the Southern United States in areas around Louisiana. The Cajun community would use ‘redbone” to describe women of mixed heritage, typically with Caucasian and African-American parents.

The rapper “Lil’ Wayne” popularized the expression in his 2012 track, “No Worries,” where the rapper utters the phrase as follows.

Lil’ Wayne uses the word to describe a woman of mixed heritage. According to the details of the song, she has a light, reddish skin tone that the rapper finds attractive.”

The term spread around the hip-hop community, with many other rappers using it in their lyrics. An example is Donald Glover, aka “Childish Gambino.” His track “Redbone” from his 2016 studio album “Awaken, My Love” broke multiple chart records.

BBC Radio 1 DJ, Annie Mac, was the first to play the song on air during her “Hottest Record” segment. The song talks about Gambino’s suspicions of his girlfriend’s loyalty. “Redbone” received nominations for Album and Record of the Year, Best Urban Contemporary Album, and Best R & R&B Song. Redbone won the Best Traditional R&B Performance at the Grammys that year.

Phrases Opposite to Redbone

However, it is a slang expression and doesn’t appear in any formal language or conversation. If you use the term in, it’s usually with a positive connotation and a reference to the other person’s skin tone.