Are you looking for a word to describe your mixed heritage? Some people think it’s okay to call yourself a “yellow bone.” Is this phrase acceptable, or is it racist? This post unpacks the meaning and origin of this expression.

The expression “yellow bone” refers to a person with mixed-race heritage. They usually have one parent with African roots and another with light-skinned ancestry. As a result, they have a light-skinned African look to them.

A recent trend starting in 2016 saw people identifying as  “yellow bone,” taking back the name and using it as an identifier for their heritage. However, some people involved in equality movements suggest the saying has roots in white supremacy.

Being a “yellow bone” might seem racist to some but fine to others. It’s all about your perspective on the issue. However, it would be wise to avoid using this saying if you are not a “yellow bone” yourself. Doing so could land you in trouble with the “woke” mob on Twitter and other social platforms.

“I identify as a yellow bone. My mother is European, and my father comes from Nigeria. We’ve lived in the United States my whole life, and people see me as black, not mullato.”

“I’m a yellow bone. I have mixed ancestry. Some people say I should stop calling myself a yellow bone, but I don’t really find it offensive.”

“I can’t believe people with mixed heritage refer to themselves as ‘yellow bone.’ It sounds like such a racist and derogatory term.”

“Being a yellow bone means that you have mixed heritage and light skin due to your genetic makeup. Sure, it sounds terrible, but it’s not terribly offensive if you think about it.”

“A yellow bone is a light-skinned African American. I don’t know why black culture places importance on looking light-skinned. It mystifies me.”

“Why do people think it’s acceptable to call people with mixed heritage ‘yellow bone.’ I was shocked when I heard someone refer to themselves as a yellow bone.” 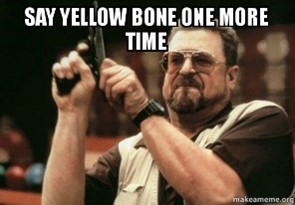 The expression “yellow bone” comes from a history of white supremacy in the developed world. In places like Asia, India, Africa, and the Middle East, people, particularly women, are seen as “more beautiful” if they have light-colored skin.

Many experts believe this tendency to revere light-skin tone comes from mental chains placed upon these societies by colonialists. However, the reality is that countries like Japan revered women with light skin long before they ever encountered colonialism.

However, skin bleaching is a practice that traces back to colonialism. Skin bleaching is very different from being born with a naturally light skin tone. It’s the practice of using organic and inorganic compounds to lighten the skin tone for a cosmetic effect.

Phrases Opposite to Yellow Bone

There is no correct way to say “yellow bone,” as it’s a derogatory term, and using it could get you in a lot of trouble if they decide you’re using hate speech against them. Today’s society is becoming ever-more sensitive regarding identity politics and topics like racism. It6’s best to avoid using the term at all.

While people who think they “classify or identify” with being a “yellow bone,” there’s no real way to validate or justify its use. It’s a derogatory term that separates people from an inclusive society, making them seem different to others based on their skin tone. That’s not acceptable in a modern culture that values equality and inclusivity for all.

“Woke” people may find the expression severely offensive. It may start a fight if you post it online or use it in conversation with these individuals around. The term “yellow bone” is the subject of chats on forums like 4Chan, and you can find plenty of memes involving the use of the expression.