Are you looking for a way to express your closeness to your best friend? You can use “thick as thieves” to describe how you rely on each other to get through life. This post unpacks the meaning and origin of this expression.

The expression “thick as thieves” means that you have a close relationship with another person or a group. You make decisions together, and people always see you hanging out together. You rely on each other to create your path into the future.

It’s common for people to refer to two friends as “thick as thieves.” However, you could also call people that work together for a company “thick as thieves.” While the use of thieves in the phrase inspires thoughts that this saying might have a negative connotation, that’s not always the case.

Being as “thick as thieves” means that you are inseparable from each other or from the group. You share the same ideology and attitude toward life.

“Look at those two over there. Since the first day of school, they’ve been thick as thieves, and I’m sure they’ll be best friends for life.”

“Tim and Allen are two best friends, and you’ll see them everywhere together. They are as thick as thieves, and they’re never apart.”

“My friends and I were as thick as thieves when we were in high school. We would do everything together. Nowadays, I barely see them.”

“When you’re a teenager, you’re as thick as thieves with your friends. However, as time goes on, those relationships start to fade.”

“You and your friends are as thick as thieves. If one of you catch the blame for something, the rest of you give him an alibi, even if he’s guilty.”

“Those government officials are as thick as thieves, and you know they’ll just keep milking the municipality finds.”

“The team in accounting are as thick as thieves. I’m sure they’re all in on a scam, and they plan on bleeding the company dry.” 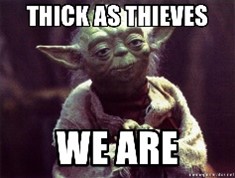 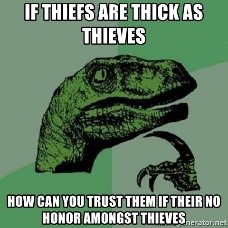 The expression “thick as thieves” originates from the early 1800s. Language experts state the word “thick” meant being close to someone by the 18th century.

The first use of the word in this context appears in “Selected Papers of the Twining Family,” the memoirs of Richard Twining, written and published in 1781, where it appears as follows.

“Mr. Pacchicrotti was at Spa. He and I were quite ‘thick.’ We rode together frequently. He drank tea with me.”

By the late 1600s, the records of the Old Bailey don’t list “thick as thieves” until 1874. The first example of the phrase appearing in writing comes from “The Morning Chronicle,” an English newspaper. The paper ran an article in February 1828, which reads as follows.

“Bill Morris and me are as thick as two thieves.”

Phrases Similar to Thick as Thieves

Phrases Opposite to Thick as Thieves

In this example, the “thieves” are people that conspire together or spend a lot of time together. The “Thick” in the saying refers to how they always seem to be hanging around each other, acting as if they are plotting something. It doesn’t necessarily refer to criminal actions.

You can use the saying “thick as thieves” to describe how two or more people conspire together to secure an outcome. The phrase means that people with ill intentions stick together, or it can mean that you always see two people together. The term can have a positive or negative connotation.