Is a friend or family member asking you to do something you hate or don’t want to do? If so, you could reply to their request with “no way, Jose.” This post unpacks the meaning and origin of this phrase.

The meaning of the expression “no way Jose” is a way to express to others that there is no way you will comply with their request under no circumstances. It’s a funny saying, but it’s no longer has any use in modern conversation due to the racist connotation around the word “Jose” and how it may offend Latin Americans.

“No way Jose” suits a variety of situations, but you should only use it around friends. Posting the expression on social media could land you in trouble with “woke” people that feel the term is somewhat racist.

Damian: “I’m taking us to the movies tonight, but you’re going to have to drive since I lost my license.”

Chevaun: “No way, Jose, I told you already, I’m night blind, and we’ll end up wrapped around a tree.”

Matt: “Can you fill in for my shift this weekend at the restaurant? I want to take the day off.”

Simone: “No way, Jose, I’ve already got plans. Ask someone else.”

Jeff: “Honey, can you grab me a beer from the fridge.”

Tim: “I think that Aaron Rogers is the best quarterback of all time.” 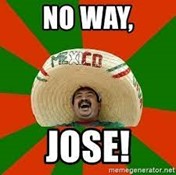 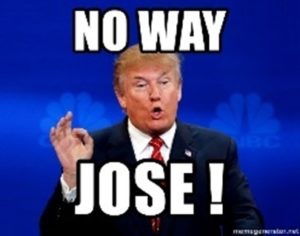 Experts believe that the slang expression “no way Jose” originated in the United States sometime in the 1960s. The “Chapman and Kipfer’s Dictionary of American Slang” states that “no way” was in use as slang by the 1960s, referring to someone declining a request or expressing disbelief at a statement.

“No way Jose” originates in the latter half of the 60s as a modification of the original “no way,” adding the “Jose” to add emphasis to the saying. Some experts believe the first use of the phrase in print was in the “Village Voice.”

However, the first verified use of the phrase in print occurred in The Washington Post in December 1979, where it appears as follows.

“I’ve got nothing against robots. But no way, Jose, is this guy going to win.”

Experts believe that Jose was not an actual person but only chosen to make the expression rhyme.

Phrases Similar to No Way Jose

Phrases Opposite to No Way Jose

Some people may use the phrase without thinking about the expressions’ racial connotations. While it might seem harmless to say “no way, Jose,” it’s a form of cultural appropriation, and it may trigger people with racial sensitivity. People that have no Latin American heritage may seem racist using the phrase in the eyes of woke people.

You can use “no way Jose” in social and professional conversations where you’re trying to impress that there is no chance you will complete another person’s request. Typically, the phrase is more common in social settings, and it’s not used much today due to the racial connotations around the saying. If you are of Latin American lineage, you could use the phrase without suffering the abuse of the woke mob telling you that you’re using a racist slur.