Did you ask someone a question, and they replied with “Bob’s your uncle,” what do they mean? This post unpacks the meaning and origin of this expression.

The expression “Bob’s your uncle” has many variants. The phrase’s meaning is to tell someone that everything is alright or going according to plan.

It’s a statement meant to build confidence in the other person asking you a question regarding your commitment or performance. By using “Bob’s your uncle,” you’re telling the other person that they don’t have to worry about you letting them down.

It’s also a way of describing a chain of events leading to a surprise where everything went as planned. You can also use the phrase to describe the seamless or smooth folding out of a plan. For instance, someone could ask you if you had any trouble getting into the house while they were away. You could reply saying that the key worked and Bob’s your uncle, you were inside the house with no issues.

Boss: “How are we looking with the Jefferson account? Is everything on track to make the presentation at the meeting tomorrow?”

Employee: “Sure thing, boss, Bob’s your uncle; we have that account in the bag for sure.”

Wife: “Honey, I can’t go anywhere without my lucky earrings; I don’t know where I put them.”

Husband: “Well, Bob’s your uncle. I just found them downstairs on the kitchen counter. Now we’re ready to go.”

Parent: “Are you going to get around to painting the garage door today? I’ve been asking you all week.”

Child: “Bob’s your uncle Dad, I knew you were going to ask, and I did that a half an hour ago.” 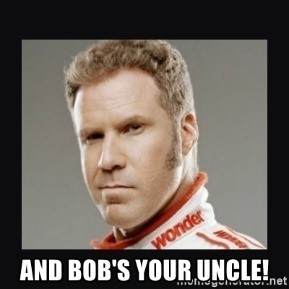 The origin of the expression “Bob’s your uncle” comes from the early 1900s. the phrase first appears in print in the bill for a musical revue in Dundee named “Bob’s Your Uncle.” The promotion for the revue appeared in the Scottish newspaper “The Angus Evening Telegraph” in 1924.

The artist John P. Long published a song in 1931 with “Bob’s your uncle” featured in the lyrics. Florrie Forde sang and recorded the track, launching her into the music hall artiste in the early 20th century.

He knows what to do

He’ll look after you.”

Eric Partridge wrote “A Dictionary of Slang and Unconventional English,” published in 1937. He notes the phrase comes from circa 1890, but there is no evidence supporting his claim. The earliest recordings of the expression date back to the 1920s and would not appear in newspapers until after WWII.

Phrases Similar to Bob’s Your Uncle

Phrases Opposite to Bob’s Your Uncle

The phrase has nothing to do with people named Bob or your uncle. It’s an expression that everything turned out okay, or you achieved what you wanted out of a task or situation. Using it to discuss family affairs is the incorrect use of the term.

You can use the saying “Bob’s your uncle” when you’re trying to tell someone that everything went according to plan or as you expected. The phrase suits professional and social use.

For instance, you could use the saying when you’re talking to your boss and describing how the month’s sales figures are on track to meet your target. You could use it with your friends when you want to tell them that you’re still on for the game on Saturday.