Did someone tell you they’re going to ‘bring home the bacon’ with their commission check? This post unpacks the meaning and origin of this expression.

The expression ‘bring home the bacon’ means you’re bringing home a financial windfall for your family. It could refer to earning a bonus at work, winning a pot at a casino, or running a profitable business.

If you ‘bring home the bacon,’ you’re taking care of your family financially, and they have everything they need. The phrase can also refer to achieving a goal or succeeding at a task.

“It feels good to bring home the bacon and provide for my family. After being unemployed for so long, I’m glad I can add value and support everyone.”

“Get ready, honey, ’cause daddy’s about to bring home the bacon. I just won a huge pot at the card table, and we’re taking the kids to Disneyland this weekend.”

“I’m glad I can bring home the bacon. You and the kids deserve a life where you don’t have to want for anything in their lives.”

“As the provider in the family, it’s up to me to bring home the bacon. I don’t want my kin to go without anything in their lives.”

“I’m glad I could bring home the bacon this month, boss. That last client pushed us well over our sales target. I think the team deserves a celebration.”

“This is how we bring home the bacon. Sure, some people have jobs, but I choose to deal drugs. It’s how I feed my kids, so don’t judge me.” 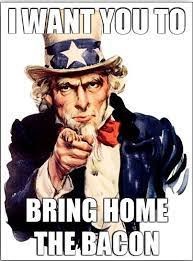 The expression ‘bring home the bacon’ originates from the story of ‘Dunmow Flitch.’ This tradition occurs every four years in Great Dunmow, Essex, stretching back to 1104. A local couple in the town impressed the ‘Prior’ of the village with their martial devotion to each other, awarding them a side of bacon for their efforts.

The first appearance of this custom in writing was in ‘The Wife of Bath’s Tale and Prologue,’ written by Geoffrey Chaucer, circa 1395, where it appears as follows.

“But never for us the flitch of bacon though, that some may win in Essex at Dunmow.”

The modern use of the term, referring to a prize or monetary reward, comes from a championship boxing match between lightweights’ Battling’ Oliver Nelson and Joe Gans on 3rd September 1906.

The New York newspaper ‘The Post-Standard,’ wrote a piece on the fight on 4th September 1906, where it appears as follows.

“Before the fight, Gans received a telegram from his mother: “Joe, the eyes of the world are on you. Everybody says you ought to win. Peter Jackson will tell me the news, and you bring home the bacon.”

Phrases Opposite to Bring Home the Bacon

The phrase has nothing to do with bringing home ‘bacon.’ It is incorrect to describe bringing home a pig for bacon or a pack of bacon to cook. The ‘bacon’ In the expression refers to money or a financial windfall.

You can use the expression ‘bring home the bacon’ in social and professional settings when emphasizing your capacity as an earner or breadwinner to your company or family. For instance, you could use it at work to describe how closing your last sale takes you over your monthly budget, landing you with a bonus.

Or, you could use the expression to describe how you’re bringing home a paycheck to your family. It could also refer to winning a pot at a casino or any other experience where you receive a financial windfall that benefits you and your family.