Are you looking for a reactionary statement to let people know that you’re in agreement with them? You could use the phrase “cool beans” to show you understand what they’re saying, and you have no problem with the idea. This post unpacks the meaning and origin of this expression.

The expression “cool beans” is a positive reactionary statement to a question. It’s another way of saying “sure” or “cool” to someone, with an added edge of excitement.

“Cool beans” is a way of agreeing with what someone has to say, and it shows them that you are ready to comply with their request.

“Cool beans” is also another way of exclaiming your approval of something. You could use it to show your excitement at someone else’s actions or words.

You: “Hey Tim, you want to hang out at the skatepark this afternoon and practice on the ramp?”

You: “Hey boss, would you mind if I took the weekend off? It’s my sister’s birthday, and we’re going to the park for a barbeque.”

Boss: “Cool beans have a great time, and we’ll see you on Monday. But you’ll have to work next weekend to cover your hours. Is that okay with you?

Wife: “Let’s go and watch that new Sandra Bullock movie at the cinema tonight. I hear it’s an epic thriller.”

You: “If you said it was a love story, I would have stayed home. Since it’s a thriller, cool beans, I’m in.”

Parents: “Will you take out the garbage, Greg, it’s starting to smell, and my back hurts.”

You: “cool beans, mom, I’ll take it out right now. I can see the garbage men coming down the street.”

Student: “Ma’am, may I got to the bathroom?”

Teacher: “Cool beans, just remember to take your hall pass with you.” 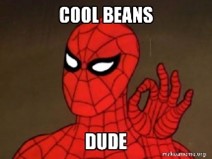 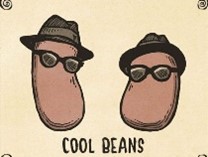 The expression “cool beans” originates from the 1970s. The comedians “Cheech and Chong” were cannabis activists producing a series of movies in the late 70s and 80s.

The duo was at the forefront of the cannabis activism movement at the time and revered by cannabis enthusiasts around the globe. Cheech (Richard Anthony Marin) would use the term in the pair’s first movie, “Up in Smoke.”

However, it took another decade or so for the term to gain popularity. The 90s sitcom “Full House” starred Candace Cameron Bure as “D.J Tanner.” D.J was one of the show’s stars and a lead character. Since Full House was a family-oriented show, there was no cussing in it. Instead, D.J created a set of expressions that were tempered down, family-friendly renditions of cuss words and phrases.

Full House was one of the most popular sitcoms of the 90s, and it wasn’t long before people started using her expressions in everyday conversation.

D.J would use the phrase frequently on the show, popularizing it alongside other catchphrases like “oh my lamda.”

Phrases Opposite to Cool Beans

The expression “cool beans” has nothing to do with cold beans. It’s a reactionary statement telling someone you are in agreement with what they’re saying or that you’ll comply with their request. Using it as a food reference is incorrect.

You can use the expression “cool beans” as a reactionary statement or confirmation statement when someone requests something from you. The phrase suits social use. You can use it to tell someone that you agree with what they are asking from you.

You could say “cool beans” when your friend asks you if you want to go to the movies to let them know you’re keen. Your boss could use it when you ask them for the weekend off. It’s a way of telling someone that you have no problem with what they ask of you.