Do you think someone is keeping something from you? You could use the saying “spill the beans” to pressure them to tell you what’s going on. This post unpacks the meaning and origin of this expression.

The expression “spill the beans” means you want someone to divulge secret or private information. You’ll use the saying when you’re curious about other people’s gossip or want to uncover hidden information from others close to you.

The saying means to divulge confidential information maliciously or inadvertently. If you ask someone to “spill the beans,” it means that you demand to know what they are keeping from you. Typically, the person will pressure the other individual to reveal the information using leverage in their relationship. It’s a common saying in gossip, and it’s still in use today.

“Ok, Tim, it’s time to spill the beans. What did Samantha say about me when you were with her this weekend? Is she interested in me or what?”

“Ok, Kim, spill the beans. We all know you were with her when it all went down. What’s the deal, and should we be worried for her?”

“Why are you keeping it to yourself? It’s not like it’s an international government secret. Come on, man. Let us in on the action and spill the beans, why don’t you?”

“We pressured Mike about it and told him to spill the beans. Although, after hearing the details, I wish we never asked about it.”

“Ok, spill the beans. Who stole the money from the register? I know you know, and you’re keeping it from me.”

“Why did Damian leave Christine? We all know he confided in you, so spill the beans.”

“It’s time to spill the beans. Stop keeping it from me and just let me in on the info. Are you my friend, or will you keep stringing me along?” 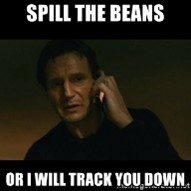 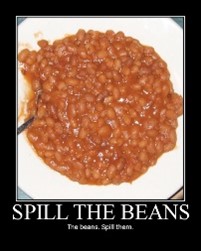 The expression “spill the beans” originates from the Americas in the early 1900s. Initially, the phrase was “spoil the beans” or “upset the applecart,” which comes from the Greek description of knocking over a container of beans.

The first appearance of the phrase in writing comes from “The Stevens Point Journal,” in June 1908, where it appears as follows.

“He just walked off the reservation, taking enough insurgent Republicans with him to spill the beans for the big five.”

After its first use, the phrase changed to mean upsetting a situation by talking out of turn. The first appearance of the saying with this meaning appears in The Van Wert Daily Bulletin in October 1911.

“Finally, Secretary Fisher of the President’s cabinet, who had just returned from a trip to Alaska, was called by Governor Stubbs to the front and proceeded, as one writer says, to ‘spill the beans.'”

Phrases Similar to Spill the Beans

Phrases Opposite to Spill the Beans

The phrase has nothing to do with spilling beans. The “beans” in the expression are hidden knowledge, secrets, or information that another person is keeping from you. “Spill” means to ask them to tell you that information. Using it concerning cooking or food is incorrect.

You can use the expression “spill the beans” when asking someone to give you the details they’re holding back. It’s a way of telling someone you know they are keeping something from you, and it’s time to bring you in on the situation.

The phrase suits professional and social use. Use it at work when speaking to a fellow employee about what the manager said to them about you in their meeting. Use it with your friends when you want them to let you in on the latest gossip they’re keeping from you.