Did someone just tell you that they like the “cut of your jib“? What does that mean? Do they think you’re a sailor? This post unpacks everything you need to know about the origin and meaning of this idiomatic expression.

If someone tells you that they like the “cut of your jib,” they’re saying they like your attitude, and they agree with what you’re saying. It can also mean that they admire how you handle yourself in a pressure situation or while relaxing.

It’s a short compliment, and you can use it to describe other people’s actions, speech, or attitude. However, younger generations might not understand what you are saying, but the context of your complement and the tone of your voice should give them clues to the meaning.

John: “I decided to approach management and tell them that we need better sales training. I didn’t just complain; I gave them some ideas for training companies that could benefit the staff’s performance.”

Steven: “I like the cut of your jib, John. You put yourself out there for others in a way that few people will do.”

Clarissa: “I think we need to change our vote in the next election; our guy isn’t doing what he promised, and the economy is in the toilet.”

Charmayne: “I like the cut of your jib, Clarissa. Let’s see how the other candidate does when she gets the power.”

Jill: “I put the kids to bed and opened a bottle of wine for us. Won’t you check Netflix for that new movie Cassandra told us about?”

Chris: “Thanks honey, I like the cut of your jib; let’s check it out.” 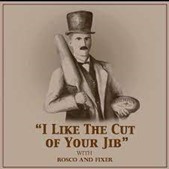 The idiomatic expression “cut of your jib” has origins extending back two centuries. It’s a popular classic colloquial saying, and it features in many modern movies, TV shows, and online. The first recorded use of the phrase is from a magazine, the Naval Chronicle, in the early-1800s, talking about British navy nautical exploits.

The 1805 edition of the publication featured captain Richard Walpole describing his journey of sailing from Bombay (Mumbai) and around the southern tip of Africa and the Cape of Good Hope.

Walpole describes a thrilling chase between two mystery ships and his vessel. They thought the ships were suspicious due to the cut of their sails, giving them away as French warships.

Walpole didn’t mention the word “jib” in the original use of the phrase. However, it does show that sailors would use the shape and the cut of the sails to identify the origin of ships at sea.

Phrases Similar to Cut of Your Jib

Phrases Opposite to Cut of Your Jib

Ways People May Say Cut of Your Jib Incorrectly

While “cut of your jib” has its origins in nautical terms, it doesn’t have any use in maritime situations, and using it to describe sailing terms is the incorrect use of the expression. The phrase doesn’t describe any sailing principles but rather a person’s attitude, actions, or words.

Acceptable Ways to Phrase Cut of Your Jib

When you’re looking to pay someone a compliment for their behavior or speech, you can use “cut of your jib” in social and professional settings. If you find what they are doing or saying agreeable with your values system, you could use the phrase to tell the person that you are on board with what they’re saying.