This post unpacks the origin, meaning, and use of the phrase “nothing is true, everything is permitted.”

Nothing is true; everything is permitted is an idiomatic expression with Islamic roots. Popular video game culture brought the saying into the public sphere on gaming forums and chats over the last decade.

Several viral memes on the internet use the phrase, usually with the “Assassins Creed” video game logo positioned on the image.

The phrase means to tell people that there are no preconceptions and no fixed firm rendition of reality. Everyone has a different experience and perception, and no one is right about their ideologies in life.

Kelly: “I can’t believe that guy thinks that letting people get away with shoplifting below a certain value threshold is a good idea.”

Shane: “Nothing is true; everything is permitted. You know how it is with progressives these days.”

Marissa: “I believe that Christianity is the only path to heaven, and everyone else that doesn’t believe in it is going to hell.”

Hailey: “Sometimes, you need to understand that other people don’t believe the same things as you. Nothing is true, everything is permitted – it’s okay to have a different outlook on religion.”

Sally: “I don’t know if you guys will understand the way my values direct my life; I’m afraid you’ll find me weird.”

Gabriel: “Nothing is true; everything is permitted, you are who you are, and we won’t judge you on it.” 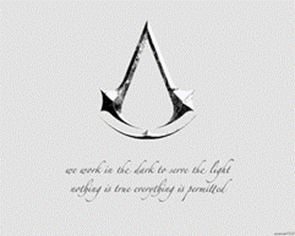 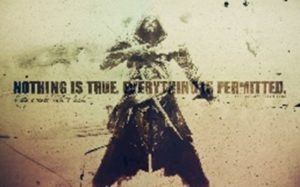 This idiomatic expression originates from Friedrich Nietzsche, the famous philosopher who wrote the phrase in his 1859 book, “The Geneology of Morals.” However, Nietzsche attributes the phrase’s origin to Hassan-i-Sabbah, the leader of the historical Assassins. This sect was a part of Isma’ili and Shia Islam. However, there is no verified proof of these claims.

The association between the phrase’s origin and Islam also appeared in the 2007 video game series, Assassins Creed.” The game was loosely based on the 1938 work of Vladimir Bartol, “Alamut,” serving as the inspiration for the title.

The Assassin’s Creed video game series grew in popularity in the early 2010s. Ubisoft released several follow-ups to the original game, sparking a huge following of the series on social media, streaming services like Twitch, and message boards like Reddit.

The fans of the series will often use the phrase, “nothing is true, everything is permitted” when discussing how it’s fine to say whatever you want in the chat or the discussion. The Urban Dictionary defined the term in 2011.

Phrases Similar to Nothing is True Everything is Permitted

Phrases Opposite to Nothing is True Everything is Permitted

Ways People May Say Nothing is True Everything is Permitted Incorrectly

Some people may use “nothing is true, everything matters” in the wrong context. The idiomatic expression suits use when you’re trying to tell someone that their opinion might not matter to you or anyone else. It doesn’t mean that nothing is true; it means that everyone has an independent perception of reality.

Acceptable Ways to Phrase Nothing is True Everything is Permitted

You can use “nothing is true, everything is permitted” when talking with people about ideological matters. The phrase comes from old language and philosophical schools of thought. Therefore, it’s suitable for in-depth discussions where you try to tell someone that their perspective might not be the same for everyone else.