Are you looking for a way to express that you haven’t seen someone in ages? You could say that you haven’t seen them in “donkey’s ears.” Is it a donkey’s “ears” or donkeys “years?” Do both of these sayings have the same meaning? This post unpacks the meaning and origin of this expression.

The expression “donkey ears” is the original variation of “donkey’s years.” Both sayings have the same meaning, referring to a long passage of time. However, the amount of time is relative to the person’s situation. For instance, you could say it took your mom donkey’s ears to get ready for the trip to Disneyworld. The excitement made it feel like a long time.

Or you could say that you haven’t seen someone in a donkey’s ears after bumping into them more than a decade later. The phrase eventually moved to the more popular version of “donkey’s years,” replacing “ears.”

“Gosh, Don, It’s been donkey’s ears since I saw you last. What’s it five or six years since we were at that concert together?”

“Jeepers, Samantha, it’s been donkey’s ears since I saw you last. You got a new boyfriend and dropped off the map. How have you been?”

“I can’t believe it’s you! It’s been donkey’s ears since you came to see us. We’re glad you could make the trip; it’s exciting to have you here.”

“I haven’t seen or heard from Alex in over a decade, it’s been donkey ears, and I can’t say I ever want to see him again.”

“This brand has been around for donkey ears. Everyone uses its products, and you won’t find a home in America where this brand isn’t in the kitchen sink cabinet.”

“It’s donkey ears since anyone was living in that property. I wonder if the owner wants to sell it for a discounted price?” 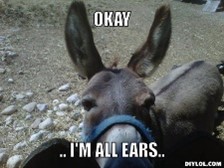 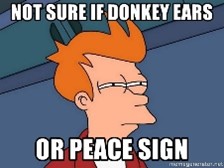 The expression “donkeys ears” originates from Cockney rhyming slang. Cockney is a form of English colloquial language spoken by people living in the East End of London. They have many rhyming phrases, such as “Apple and pears” and “donkeys ears.”

The phrase has been around since at least the mid-19th century, with the first example of the expression appearing in print in The Salisbury Times in July 1876, where it appears as follows.

“Didn’t you ask him how long it had been in his possession?

I can’t recollect that. I might have done so.

Didn’t he say for years and years and donkey’s years?”

The English writer, Edward Verral Lucas, published his novel “Vermilion Box” in 1916, where the phrase appears as follows.

“Now for my first bath for what the men call ‘Donkey’s ears,’ meaning years and years.”

Therefore, the phrase predates its use in Cockney slang by nearly 75 to 100-years.

Phrases Opposite to Donkeys Years

The phrase has nothing to do with donkeys or their ears. Some people may confuse this saying with “donkey’s years.” However, they are the same saying, with “donkey’s years” being the newer rendition of the classic expression. Using it as a reference to donkeys is incorrect.

You can use the expression “donkey’s ears” when expressing that it’s taking a long time to achieve a goal or start a project, task, or action. It means a long stretch of time, encompassing hours, days, weeks, months, or years. The phrase suits professional and social use.

Use it at the office to describe how the CRM takes “donkeys ears” to process a new client application. Use it at home to tell your partner that it’s been donkey’s ears since you went camping with the dogs. The phrase suits occasions where you want to express your frustration with the passing of time or to note a long passage of time.