Are you looking for a way to call someone a cool guy or a respected person? You could call them “Don Dada” to show them that you hold them in high esteem. This post unpacks the meaning and origin of this expression.

The expression “Don Dada” means someone that the community holds in high regard. He is a leader and often a mouthpiece for the community. The phrase applies to music artists, gangsters, and other leaders of alternative lifestyles and counter-culture groups.

A “Don Dada” is a person with a reputation in the streets. If they are a musician, they are one of the leading voices in the development and progression of the industry. If they are a gangster, they are at the head of the organization.

The phrase has a uniquely Jamaican origin to it, and it’s common for Jamaican musicians and music artists to use it when talking about the leading names in the industry. Shaba Ranks describes a “Don Dada” as the following.

Don Dada is the “boss of all bosses.” He is in the highest position on the organizational chart and the man everyone aspires to be. The Don Dada will run the streets, and he will run the club. He’s a man with a reputation in his local area, respected by everyone that knows his name.

“Louie “Ox” Rankin was the original Don Dada. People knew his name everywhere he went, and he was a legend in the streets.”

“If you want to be the don dada, you have to pay the price. It takes a lot more than living the gangster lifestyle to earn respect in the streets.”

“I know that guy. He’s a real don dada. The people treat him like a celebrity, and he’s got a reputation wherever he goes.”

“If someone calls you don dada, it means that they think you are a boss and deep in the streets. It’s a sign of respect in the community.”

“Being the don dada isn’t as easy as you think. There are plenty of people out there looking to take you down at any moment.”

“A don dada is someone who is at the top of the food chain. They put in their time and work, and they made it to the big time.” 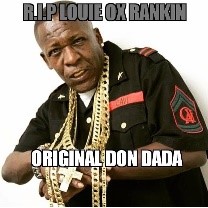 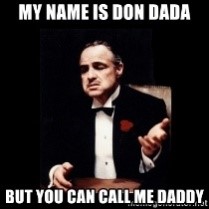 The expression “don dada” comes from Jamaica. It’s the moniker of the “OG” dancehall singer, Louie Rankin, known as the Original Don Dada. He’s a film actor and musician, but he, unfortunately, died in a tragic car accident in Ontario, Canada.

Rankin grew up in Saint Thomas and East Kingston Parish. He was living in Toronto at the time of his death. Don Dada would sing tracks at live dancehall events and release albums. He earned a reputation as one of the top dancehall artists and had a global fanbase.

Phrases Opposite to Don Dada

This Jamaican saying is well-known across the United States. However, it doesn’t have much of a global influence. The phrase doesn’t have any sexual connotation to it, so using it in reference to calling your lover “daddy” is incorrect.

You can use the phrase “don dada” when paying someone a compliment that boosts their ego. You’re saying that they are the king of the neighborhood or someone highly revered in the community.

The phrase suits social use. You can use it when you want to give your friend a boost to his ego after he does something beneficial for you. Or you could use it when referring to the leader of your community.