Are you looking for a way to tell someone you’re feeling strong, fit, and healthy? Tell them you feel in great shape by saying “fit as a fiddle.” This post unpacks this expression’s meaning and origin.

The expression “fit as a fiddle” means you are at the peak of physical fitness when referring to people or yourself. It can also refer to inanimate systems or objects. For instance, you could say your business is “as fit as a fiddle” if it’s doing well financially.

It’s more common for people to use the expression to describe other people or themselves. It’s a way of saying that you’re in great shape and feel a strong sense of well-being. You can also use the phrase when referring to other people’s state of physical fitness.

You can also use the saying as a way to describe peak performance at work or general feelings of well-being not related to fitness.

“I just broke my 5-mile time this morning. That’s a goal I’ve been wanting to reach for months. I feel fit as a fiddle right now.”

“Look at Kirsty do her floor routine. She’s in full control over her body, and she looks fit as a fiddle right now.”

“Boss, this month was a great way to wrap up a fantastic quarter. Profits are up, and the cash flow statement and balance sheet are looking fit as a fiddle.”

“You must feel as fit as a fiddle, you’ve lost ten pounds in the last two months, and you’re going to the gym almost every day.”

“I wouldn’t say I’m in great shape at the moment. I’m far from feeling as fit as a fiddle after sitting out for months due to injury.”

“Going for a run each day will eventually make you fit as a fiddle; it’s about building consistency.” 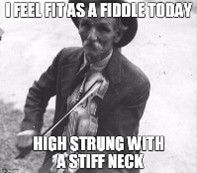 The origin of the expression “fit as a fiddle” comes from the slang name for the violin. At the introduction of the term in the early 1600s, the word “fit” described someone “suitable” for a task, not necessarily someone with physical fitness.

Thomas Dekker was the first author to use the expression in print. His work, “The Batchelars Banquet,” published in 1603 has an early rendition of the saying, where it reads as follows.

“Then comes downe mistresse Nurse as fine as a farthing fiddle, in her petticoate and kertle.”

A little over a decade later, the full version of the phrase would appear in less archaic language. W. Haughton’s “There’s English-men for my Money” shows the phrase as the following.

“This is excellent ynfayth [in faith], as fit as a fiddle.”

Phrases Similar to Fit as a Fiddle

Phrases Opposite to Fit as a Fiddle

Ways People May Say Fit as a Fiddle Incorrectly

The saying has nothing to do with a “fiddle” in modern use. Using the expression to comment on someone’s musical performance would be incorrect. The fiddle, in this case, is a descriptive word for optimization or near perfection.

Acceptable Ways to Phrase Fit as a Fiddle

You can use the expression “fit as a fiddle” when telling someone how you feel strong, healthy, and fit or when commenting on someone else’s state of physical fitness. The saying can also apply to mental health and animals, such as your pet, or artificial systems, like a CRM or an AI program. It’s a useful saying to describe anything that is performing at optimal levels and suits professional and social use.

You could use it at work to describe how the books and economic health of the company are at all-time highs. Or you could use it at home to tell your partner that your daily training schedule is beginning to pay dividends in your fitness and health.