Are you in need of a change? You could post a lo up on social media to describe the change in yourself.

The expression ‘glow up’ or ‘glo up’ is a play on the expression ‘grow up.’ To ‘grow up’ means to mature and become an adult, cutting out adolescent behavior. Similar to ‘grow up,’ ‘Glow up’ refers to manifesting a physical and mental change over time.

“Man, have you seen Mike recently? That kid did a great glow up job on himself. Now he’s in finance and dresses in a suit every day.”

“Have you seen the ‘glow up’ trend on social media? It’s amazing to see how people can turn their lives around.”

“That guy is a good example of a glow up gone right. He’s changed everything about himself, and it’s like he’s a different person. I hardly recognize him anymore.”

“The problem is that when your friends’ glow up,’ they change who they are as a person, and they might not be someone you like.”

“Looking at all these ‘glow up’ posts and videos is inspiring. I think it’s time to make a change in my life.” 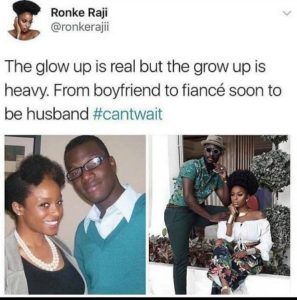 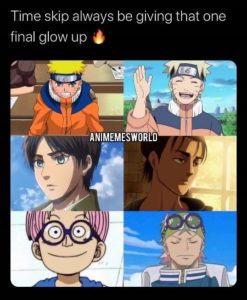 The expression ‘glow up’ originates from hip-hop music. The rapper ‘Chief Keef’ coined the term in his track, ‘Gotta Glo Up One Day,’ released in August 2013. The track features Keef rapping about an immature woman that needs to grow up and his rise to fame and wealth.

The YouTuber ‘Body’ uploaded the track the following day, where it received 160,000 views until 2017. In the same year, rapper Meek Mill would continue the trend, releasing a song titled ‘Glow Up.’ The music video garnered more than 7 million views during its first year of release.

The earliest use of ‘Glo Up’ on social media comes from the Twitter user @caitlincrowley_ in October 2017, where she posted the following tweet.

‘Freshman to senior year does this count as a glo up???’

The post inspired members of the LGBTQ community to post their glo-ups, with the trend going viral and Twitter publishing a ‘Moments’ page for ‘glo ups.’

Phrases Similar to Glow Up

Phrases Opposite to Glow Up

Some people may confuse ‘glow up’ with ‘grow up.’ However, they are two separate terms. To ‘glow up’ means that you can change your attitude or style, or both, progressing your being into a more refined state. The phrase ‘grow up’ simply refers to a person getting older.

Acceptable Ways to Phrase Glow Up

You can use the term ‘glow up’ to describe a personal transformation in yourself or others. It refers to a gradual change in a person’s appearance, attitude, or both. To ‘glow up’ refers to someone ‘shinning.’ They have a new lease on life, and they’re doing well. If you say someone glowed up, you mean that they came into being and found their path in life.

You can use the phrase in social situations with friends and family. For instance, you might not have seen your friend in a while, then notice them looking suave on a magazine cover. Or they could get a high-paying job, changing their looks, wardrobe, and attitude to someone that appears successful and confident.