Did a person you like suddenly stop communicating with you? If so, they ‘ghosted’ you.

The term ‘ghosted’ means you cut off all communication with a person with no warning. It’s a way of completely disconnecting from someone, usually a person you’re dating. Most people will ‘ghost’ someone after a few dates if they don’t think the relationship has any future.

Ghosting is considered unfair to the other person, giving them no closure on the relationship.

If a person ‘ghosts’ you, they don’t pick up your phone calls or respond to your texts. Sometimes, they may block you on social media to avoid facing you again. If you see someone that ‘ghosted’ you in public, they are likely to pretend they didn’t see you or don’t know who you are when they’re around others.

“I was chatting to this girl on Facebook, and she suddenly stopped talking to me, blocked me, and I never heard from her again. She totally ghosted me.”

“I got ghosted by this girl once. We went out on a couple of dates, and then I never heard from her again. She never told me what freaked her out.”

“I was dating this girl once, and she ghosted me. A few months later, I saw her again with some other guy, and she couldn’t even look me in the eye.”

“It’s all fun and games until she leaves. The last girl I dated ghosted me. She never even called me and told me what turned her off about me. Now I have a bit of a mental block with talking to women.”

“I totally ghosted this guy last week. It was so funny. He tried to call me like a million times and sent me around 100 DMs. What a psycho.”

“I ghosted this guy last weekend after I was how he treated the waiter at dinner. I can’t hang around with douchebags like that. He’s still texting me, asking me what happened. Lol.” 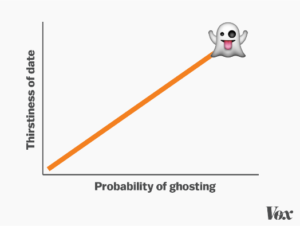 The expression ‘ghosted’ originates from celebrity relationships. Charlize Theron claimed she stopped dating Sean Penn in 2015, choosing to distance herself from him by not picking up his calls or answering his text messages.

Shortly after the couple split, the New York Times wrote an article on ghosting, describing the behavior in detail. However, the term goes back further than this, with the earliest entry in the Urban Dictionary being in 2009. The post in the Urban dictionary refers to a guy ghosting a girl.

A survey by the Huffington Post showed that 11% of participants had ghosted someone before. The research shows that 15% of men have ghosted someone, while 25% of women admit to using the strategy.

Phrases Opposite to Ghosted

You can use the term ‘ghosted’ in situations where someone ditches you and never contacts you again or returns any of your calls. Typically, you’ll use this when dating someone. If they ditch you after the first or second date, never contact you again, or block you on social media, you’re ‘ghosted.’ Men and women can ghost each other, but it’s more common for women to do it to men.

The term ‘ghosted’ also applies to text-based conversations and online relationships. If someone you were talking to blocks you and never messages you again, you’re ‘ghosted.’ The term only suits social situations and has no professional use. If you ghost someone, you never want to see or hear from them again.