Did a trans person just ask you to go on a date, but you only date heterosexual people? You could tell them you’re ‘super straight’ to get them to back off and leave you alone. This post unpacks the meaning and origin of this expression.

The expression ‘super straight’ refers to a sexual orientation where the person will only date people of the opposite sex. They are not interested in having sexual intercourse with gay or trans people. As a result, many trans people label ‘super straight’ individuals as transphobes or homophobes, but that isn’t always the case.

A ‘super straight’ person is heterosexual. Both men and women can be super straight. Using the term super straight on social media could result in trans or ‘woke’ people calling you out for being transphobic.

“Nah, I’m good, man; I’m super straight. I’m not interested in having relations with men that think they’re women. It’s cool that you’re trans and all. You’re just not the right person for me.”

“Trans people can’t stand it when straight people turn them down. I don’t care what people say, I’m not into trannies, and I’m super straight. You won’t catch me dating a trans person.”

“Trannies are so insistent on your dating them because they think they’re now another sex. These people don’t realize that we’re super straight, and they’re still their old sex to us.”

“Being super straight is homophobic and racist. You can’t tolerate our culture, so you have to fight against it.”

“Super straight people are all racists and homophobes. I’ve met them, and they refuse to date me, even though I’m post-op. their level of intolerance is unacceptable.”

“Being super straight is fine with me. I don’t really care much about labels anyway. I don’t care about you judging me, slap a label on me if you want.” 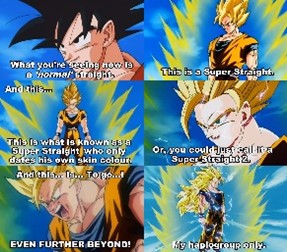 The expression ‘super straight’ originates from the TikTok influencer Kyleroyce.’ Kyleroyce posted a video titled ‘who else is super straight?’ in February 2021, claiming he created a new form of sexuality. Kyle claimed he was tired of people calling him transphobic because he refused to date trans people.

Kyle says the following in his video on the topic.

I only date the opposite gender, women, that are born women. So you can’t say I’m transphobic now because that is just my sexuality.”

The video went viral over the following weeks, eventually landing on the infamous message board, 4Chan. Far-right trolls adopted the expression, spreading it on social media for laughs and a poke at the trans community.

As a result of the trolling, trans people regard the use of ‘super straight’ as a homophobic and transphobic ‘dog whistle.’

Phrases Opposite to Super Straight

You can use the phrase ‘super straight’ when you’re referring to a sexual ideology where you only date women that are born women. You’re not interested in dating trans people or men that identify as women. Being super straight means you have a heterosexual preference and don’t have sex with people of the same gender or assumed gender.

As a result of the ‘woke’ movement to spread ‘diversity’ in the social sphere, activists see men and women that designate themselves as being ‘super straight’ as intolerant of the LGBTQ community. However, in many cases, the ‘super straight’ person doesn’t harbor these beliefs.