Did some just accuse you of ‘third-wheeling’ it? What do they mean? This post unpacks the meaning and origin of this expression.

The expression ‘third-wheeling’ refers to a person that tags along on a date with a couple. A ‘third-wheel’ is someone who doesn’t have a date but comes along to hang out with their friends anyway. Third-wheeling can leave the couple feeling frustrated with the person, or they may enjoy the person’s company.

Men and women are capable of ‘third-wheeling,’ and there is no specific gender applying to the term. Third-wheels typically don’t have a date because they think they can’t find a partner or have experienced a recent breakup and are looking for company when they go out.

“Yeah, I know you and Kim are going to the movies, and you don’t mind if I tag along. But I’ll feel like I’m third-wheeling it all night, so I’ll pass, thanks.”

“Look at that dude over there third-wheeling it with that couple. What a loser, you think he would find someone for himself or just leave them alone.”

“I’m glad I was never a third-wheeler when I was young. I never had a problem finding a partner myself.”

“Why do you think

people decide that third-wheeling is okay? I mean, don’t they feel embarrassed that they don’t have someone with them?”

“I would look such a fool if I were a third-wheeler like that guy. I bet he’s such a loser that he’s never had a girlfriend.”

“You can always tell when someone’s a third-wheeler. The couple is all over each other, and they stand around acting like they don’t notice it.”

“Why are you over here third-wheeling it with this couple? Don’t you have somewhere else to be?” 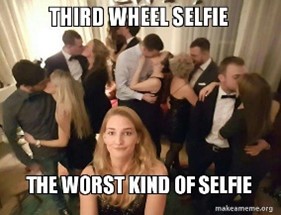 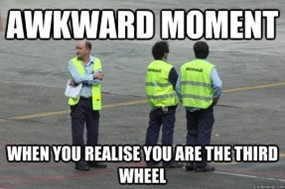 The expression ‘third-wheeling’ comes from a 1949 citation from the Saturday Evening Post. The phrase appears in the short story “Decadent Angel,” written by Phyllis Duganne when it reads as follows.

“Certainly, I was jealous of Springer since I was more than half in love with Campaspe. I remember once, in a childish outburst of temper, that I told Springer I was sick of being the perpetual ‘gooseberry,’ the unnecessary third wheel.”

This example of the expression from 1949 beats the earliest reference in ‘The Corpus of Historical American English’ by almost six years. The phrase also appeared in 1955, the first appearance of the expression in connection to someone tagging along on a date with two other people.

“Bunty … had said repeatedly in the last few days that Joe was up to something, that the double date wasn’t a generous gesture but a trick of some kind, a vengeful way of getting even and adding a fourth wheel because he was sick of being a third wheel.”

The phrase saw its use spread across the United States, becoming commonplace in culture by the 1970s. The modern version of ‘third-wheeling’ first appears in the Urban Dictionary in 2007.

Phrases Opposite to Third Wheeling

Some people may use the phrase ‘third-wheeling’ to describe actions with motor vehicles or motorcycles. However, the wheel in the expression refers to a person, not a machine. Using the expression for any other reason except to describe social relationships is incorrect.

You can use the expression ‘third-wheeling’ when you’re out with a couple and don’t have a date. The phase suits social conditions in real life, but there is some use for it online when discussing someone’s ‘third-wheeling’ behavior.

You can use third-wheeling to describe someone’s actions, or you could use it as an excuse not to go out with a couple because you don’t want to be the third wheel in the arrangement. Third-wheeling is suitable for all sexualities and means the same thing across all genders.