Are you looking for a way to tell someone you experienced a double-dose of good or bad results from something? You could say you got a “double whammy” you don’t expect. This post unpacks the meaning and origin of this expression.

The expression “double whammy” refers to receiving a double dose of something. It can have a positive or negative connotation, and the person can end up with a bad or good result from experiencing a “double whammy.”

The phrase can refer to a double-blow or a severe setback when the adverse or good events are amplified by another event arriving shortly afterward. A double-whammy can refer to actions or events referring to receiving bad or good news from others or the media.

“They hit us with a double whammy like this and expect us to just fold. First the news of the merger, and now they’re telling everyone they can expect layoffs.”

“The boss hit me with a double whammy. He gave me a raise, and he told me I was the lead coordinator on the next project.”

“What a double whammy. First, you hit me with the free tickets, and now you’re inviting me backstage. This is too good to be true.”

“We had a bad double whammy last week. First, we got news of grandma passing, and then cousin Zeke died in a car accident a few hours later.”

“This ice cream is a double whammy taste sensation. First, you get the vanilla on the outside and then the chocolate on the inside.”

“Whoa, that’s a double whammy I didn’t expect. You’re using drugs and dealing them on the side? How long do you think it will be before you go to prison?” 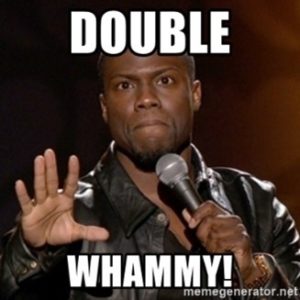 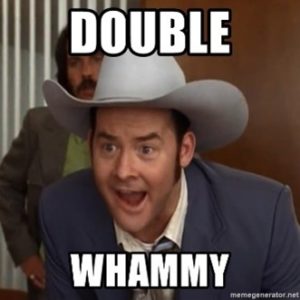 The expression “double whammy” originates from witchcraft, where it describes a curse or hex. However, the phrase would enter used in sports broadcasting in the early 1900s. The first appearance of “whammy” in print comes from the Syracuse Herald-Journal, published in October 1939, where it appears as follows.

“Nobody would have suspected that the baseball gods had put the whammy on Myers and Ernie when the ninth opened.”

The phrase “double whammy” would first appear soon afterward. The expression appears in the Oakland Tribune, in August 1941, in an op-ed piece about an interview with boxing manager Wirt Ross, where it appears as follows.

“Professor Hoffmeister says I don’t get the double whammy to put on human beings until Lesson 9.”

The phrase experienced widespread adoption across the US and the UK, with the UK experiencing more use of the expression than the States. The term was a common tagline during the 1992 election campaign for the Conservative Party.

Phrases Opposite to Double Whammy

The phrase “double whammy” refers to life events and outcomes, not to acts of physical violence. While it’s not technically incorrect to say you punched someone with a “double whammy,” it’s not the common use for the term.

You can use the phrase “double whammy” to describe situations where you receive a doubling of your good or bad fortune. It’s a way to describe receiving a second impact when you’re reeling from the first. The phrase suits professional and social use.

You could use “double whammy” to describe how you ended the sales month closing two deals simultaneously. You could use it at home to define a “double whammy” of the car breaking down on your and the bus not arriving on time. The phrase describes a situation in positive or negative connotations, depending on the context of the conversation.