Did your friends invite you someplace you don’t want to go? You could text them “GLHF” to let them know you won’t be joining them. This post unpacks the meaning and origin of this expression.

The acronym “GHLF” means “good luck, have fun.” Gamers will use the expression at the beginning of a game to wish other players good luck.

The abbreviation also has a use when texting friends. If they ask you to come out with them somewhere, and you don’t feel like going, you could reply with “GLHF” to let them know that you’re staying home or have other plans.

GHLF also has a sarcastic meaning to it in some cases. It can be a way of telling someone that their suggestion is boring and you don’t want anything to do with it.

“John just texted me and said he’s spending the night at a friend. I texted him GLHF, so I don’t think we’ll see him till tomorrow.”

“You guys are going to the stadium for the concert? GLHF, I’m not feeling it. I think I’ll give it a skip. Send me pics if anything cool happens.”

“So, you’re going to the movies this evening? Well, GLHF, I hope they’re playing something decent.”

“I don’t care if you guys have an extra ticket to see Justin Bieber. GLHF, I’d rather spend the evening gouging out my eyeballs.”

“The boss wants to see you in his office for a meeting. GLHF, I hope it’s not anything too serious.”

“GLHF, the show sounds like fun, but I have other plans this evening. I’m going out with Terry, and he promised me a good night out.”

“Okay, GLHF. I don’t care if you don’t invite me to the party. I’ll go and hang out with someone else.” 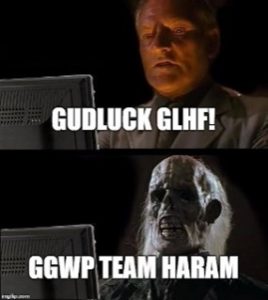 The expression “GHLF” comes from text abbreviations that started in the late 1990s and early 2000s. Before the advent of smartphones, people used keypads to key in their messages via SMS. To reduce the number of buttons pressed when typing a message, people used abbreviations and acronyms for commonly used sayings.

The first entry of “GHLF” into the Urban Dictionary was in 2003. However, many people consider the acronym “GHLF” a toxic acronym because it has a negative connotation. As a result, it’s not as common as other acronyms since gaming platforms and chats ban users who use intimidation and hate tactics in conversations.

However, the term is still in use, and you probably receive it from people you know from time to time when making suggestions.

Phrases Opposite to GLHF

Some people may not understand the acronym “GLHF.” It’s one of the lesser-used acronyms in text messaging. Using the acronym to describe anything but “Good Luck, Have Fun” is incorrect. When you type the abbreviation into a text, you won’t use a comma or semi-colon between the GL and the HF.

You can use the acronym “GLHF” when you want to tell someone to have a good time. The phrase also suits sarcastic use. When someone invites you somewhere you don’t want to go, you could use it to let them know you’re not keen to leave the house or you have other plans.

The acronym is only suitable for use during text message conversations. Using it in verbal communications would require you to say each word to avoid confusion.

Use it when your son texts you to let you know he’s having a sleepover at a friend’s house. Or you could use it when your friends invite you out, and you don’t feel like joining them for the evening. It’s a versatile saying and a great way to get out of something you don’t want to do.