Did your friend just text you to say they’re going to the club this evening? If you’re not planning on going with her, you could text “SSDGM” to let them know they need to be careful when they’re out on the town. This phrase unpacks the meaning and origin of this expression.

You can use “SSDGM” during text conversations with friends. The acronym stands for “Stay Sexy & Don’t Get Murdered.” The saying applies to scenarios where a friend lets you know she’s going out for the evening, usually by herself.

By sending them “SSDGM,” you’re telling them to stay safe and watch out for people trying to drug them or cause problems with them. Using SSDGM means that you care for the other person, and you don’t want them to be in a bad situation.

“Nice, glad to hear you’re getting back onto the dating circuit after your breakup. Remember, dating changed a lot over the last ten years, so SSDGM.”

“I’d join you at the club, but I have to study for an exam tomorrow. Be careful out there. There’s plenty of crazies looking to take advantage of you, SSDGM.”

“Going out by yourself isn’t a great idea. While you’re likely to have a good time, there’s always the possibility of someone drugging you. SSDGM, I don’t want to attend your funeral this week.”

“Be careful out there. Sweden is the second most dangerous city in Europe. Don’t dress provocatively, or someone might take advantage of it. SSDGM.”

“School shootings are a real social problem. I don’t want to drop my kids off at school and have to tell them SSDGM every morning.”

“I’m putting on my best dress for the club this evening. I love how I look in it. My friend just texted me and said, ‘SSDGM,’ what is she talking about?”

“Stay sexy and don’t get murdered. That’s good advice to young women hitting the town for a fun night out. Text your friends SSDGM to get them to think about staying safe while they’re out.” 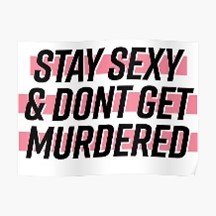 The expression “SSDGM” originates from the novel with the same title, “Stay Sexy & Don’t Get Murdered: The Definitive How-to Guide,” written by authors Georgia Hardstark and Karen Kilgariff. The pair published the book in May 2019.

This non-fiction book is a byproduct of the true-crime comedy podcast “My Favorite Murder.” The book provides a memoir of Hardstark and Kilgariff, and it was well-received by readers. The titles of the chapters feature common catchphrases from the podcast.

According to the experts, the book is a mixture of self-help and memoirs, and it caters to a female audience. Language experts are unsure of when the acronym entered text language. However, the first entry of the term into the Urban Dictionary was in 2016.

The acronym “SSDGM” doesn’t include the “&” symbol between the letters “S” and “D.” When spelling it out on social media or text, you’ll use “SSDGM” as the acronym, with no special character. The phrase applies to women, so saying it to a man or boy is incorrect.

You can use the acronym “SSDGM” in online and text discussions. The abbreviation is well understood by people that use text messaging, and you won’t have any problems with people misunderstanding what you’re saying. The expression suits social use, and you’ll see women and men using it online in chatrooms, forums, and message boards.

“SSDGM” suits casual online conversations where you want to remind people to stay safe. You can use it when a friend tells you they are going out for the evening or when you’re telling someone to stay safe when taking a trip or vacation.