Are you looking to comment on your friend’s posts and bring them down a notch? You could use “IMAO” when telling them your opinion. This post unpacks the meaning and origin of this expression.

The acronym “IMAO” stands for “In My arrogant Opinion.” It’s a text-based acronym used for giving people your opinion online and in text conversations. If you use “IMAO,” you’re telling the other person that their idea needs improvement and they should consider altering their strategy.

The phrase appears as “IMAO” and “imao” online. There is no difference in meaning between the two spellings. However, it’s common for people to confuse IMAO with LMAO. So, it’s better to spell it in lower-case to avoid confusion with the other party to the conversation.

“IMAO, you need to think about what you’re doing with that money. Spending it on that item is a bad choice, and you’ll regret it later.”

“I don’t know what to say about that. It’s so shocking, and I think you need to reconsider your choice, imao.”

“You have too much going on right now to be effective with your job, imao. You need to stop spreading yourself so thin and focus on one client at a time.”

“There is no way you’re going to win, IMAO. The field of competition is too thick, and you’re competing against division one athletes.”

“IMAO, I think that going to the Bahamas for a vacation is a waste of money. You’re better off staying home this summer and saving the cash.”

“Why on earth would you do that? That’s a waste of time, imao. You could do so much better with another job that stimulates you creatively.”

“IMAO, you don’t need that. It’s a waste of money, and you would do better with saving towards something worthwhile.”

“That dress is a mistake, imao. Return it tomorrow and get something nice. That’s a monstrosity.” 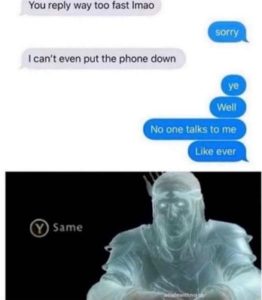 The acronym “IMAO” originates from the advent of text messaging in the early 2000s. Text changed how we communicate, leading to the abbreviation of many popular sayings. Users abbreviate expressions in text messages to avoid typing out the entire phrase.

IMAO (In My Arrogant Opinion) is the opposite of “IMHO” (In My Humble Opinion). It means that you exaggerate claims or have a huge sense of self-importance.

According to the experts, “imao” originates from the movie “Forgetting Sarah Marshall,” released in 2008. Actor-writer Jason Segel and director Nicholas Stoller used the acronym in the film. The film was a hit, and it wasn’t long before people started using “imao” in their text messages.

The phrase also has a variant, “IMMAO” “in my most arrogant opinion,” conflating the arrogance of the user. It may also appear as “IMNSHO” (In My Not So Humble Opinion), where the user’s arrogance seems subtle.

Phrases Opposite to IMAO

IMAO is an acronym for “In My Arrogant Opinion.” Some people may confuse the term with “LMAO” (Laughing My Ass Off). It’s easy to confuse the “I” with a lower-case “L.” There are dozens of memes online poking fun at the similarity of the spelling and people’s mistakes when using it.

You can use the acronym “IMAO” in your text conversations, online chats, message boards, or forums. It’s a well-understood acronym, and people frequently use t in text messages. You’ll use “IMAO” when you’re giving someone an arrogant and one-sided opinion. You’ll usually be using the term to tell people that you’re against whatever plans they have for you or them.

IMAO means that you place your opinion above others, and you believe it’s the right way to approach a task or situation. However, it can come across as pompous, and it may upset the other person in the conversation.