Do you want to let someone know they are the big boss? Or maybe you want to tell them they have a fearless attitude? You could use “kahunas” to comment on their authority or bravery. This post unpacks the meaning and origin of this expression.

The expression “kahunas” can refer to someone having “brass balls” or a courageous, fearless attitude to approaching life.

The phrase “Big Kahuna” refers to an expert in their chosen field or a leader. Historically, it’s used to refer to professionals like Doctors.

“That guy has some kahunas on him. I pointed out the hot girl, and he walked right up to her and started chatting away. I could never find the courage to do that, respect to him.”

“The Big Kahuna is on his way to the office, people. Let’s get things looking ship-shape around here before he arrives.”

“You have a set of brass kahunas on you, man. I can’t believe you managed to pull that off. Weren’t you scared at all?”

“My wife likes to call me ‘the Big Kahuna’ when alone. It’s her way of telling me that I’m in charge of the household.”

“The kahunas on you for stepping to me like that. Anyone else would have withered and sulked away. I respect your honesty and bravery. Well done.”

“He’s the Big Kahuna of the team, and everyone looks to him for leadership. He knows he’s the boss, but he doesn’t throw his weight around and makes people feel valued.”

“The kahunas on you. That was amazing. I don’t think anyone I know dares to do something like that. Well done.” 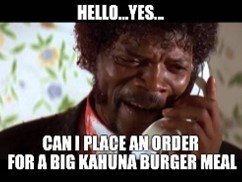 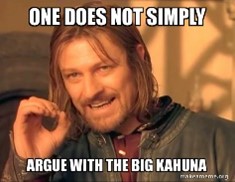 The expression “Kahunas” originates from the saying “the Big Kahuna.” The Kahuna is the leader of a Hawaiian tribe, but it can also refer to anyone of importance or high social standing in your life. An 1886 report by the Hawaiian government defines the word as “sorcerer or doctor” in the native Hawaiian language. Hawaiians would use it to describe a priest or navigator.

“Kahuna” can also refer to “god of surfing.” Traditionally, the big Kahuna is an expert in canoe building, farming, and many other practical skills. The community may call on the big Kahuna for blessings and officiate wedding ceremonies.

The word “Kahunas” has disputed origins. However, language experts believe the saying comes from the fearless attitude of The Big Kahuna. Westerners would change the meaning of “Kahunas” to mean “balls.” If you have big kahunas, someone is telling you that you have brass balls or a fearless attitude they respect.

Phrases Opposite to Kahunas

The “big kahuna” is someone who is in a position of power. It can refer to women or men holding positions of power in their community or country. For instance, the President of the United States is the Big Kahuna in the G7, and he runs the country.

However, “Kahunas” refers to “balls,” or bravery. You can use the phrase to describe a man or woman’s fearless attitude to life. However, some women might take offense to you using the term.