Did someone just call the government a bunch of “big wigs” in your conversation? What do they mean? This post unpacks the meaning and origin of this expression.

The expression “big wigs” refers to someone of importance. That person is usually of higher status or authority in you in life, and you may feel they have some sort of control of the political, social, and economic spheres of life.

For instance, your boss would be a prime example of a big wig. They are the company’s leader and the person people look up to when she walks into the office. The president is also a “big wig” in the eyes of the global community and the country he represents.

“We’re on our way to see the foundation’s board now. Those big wigs think they own everything, but we’re about to give them a surprise.”

“I have no idea when they’re going to increase the cost of gas at the pump. That’s up to the big wigs in government.”

“I have to attend a meeting upstairs with the big wigs in the C-suite, I’m not sure what they want me to say, but I’m going to wing it anyway.”

“The big wigs at the supercar club thought they were so much more elite than everyone else there; it was funny to watch.” 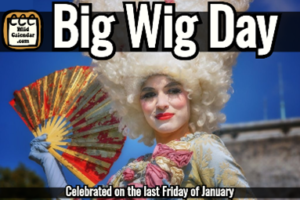 The Bourbon Kings of France were the first to start the fashion of wearing wigs. King Louis XIII (1601 – 1643) wore a wig after going prematurely bald in his twenties. By the time of Louis XIV, wigs were obligatory for “persons of quality” and nobility.

At the time of their invention, they were called “periwigs,” with the name shortened to wigs around 1675. A big wig was an expensive item, and only the elite could afford one. As one would expect, it wasn’t long before the French nobility were one-upping each other to see who could wear the biggest wig.

The first written record of the expression goes back to 1781 in G. Selwyn’s “Letters in 15th Rep. Hist. MSS. Commission,” where it appears as,

“A new point of discussion for the lawyers, for our big wigs, for their Lordships.”

This use of the term points to the British judiciary, where the attendees would wear wigs. At the time, syphilis was rife in England, and many nobles found themselves losing their hair as a symptom of the disease.

As a result, parliament adopted the use of wigs to keep up appearances in court and the commons.

Phrases Opposite to Big Wigs

While the phrase originates in the wigs used by parliament members, the modern use of the expression has nothing to do with wigs. Using the saying to describe someone’s big hair, wig, or hairpiece is the incorrect use of the term.

You can use the phrase in social and professional situations and with friends or colleagues. For instance, you could tell a co-worker you’re going to a finance meeting with the “big wigs.” Or you could say to your friends that the big wigs in government are cutting your social security.