Are you listening to Donald Trump’s old speeches? If so, you’ve probably heard him say how he wanted to “drain the swamp.” This post unpacks the meaning and origin of this expression.

The expression “drain the swamp” means to root out the corrupt officials in government. Conspiracy theorists claim that Washington DC is an evil institution run by legacy politicians and influenced by big business.

They claim there is a revolving door from Washington to big business. For example, politicians leave their careers in Washington to work for a pharma giant that got regulations approved for new drug trials.

“Trump was right; the politicians are doing nothing to help the people; they are just lining their pockets. We need to drain the swamp and replace these crony capitalists.”

“As Trump said, drain the swamp and get the bad actors out of office; it’s the only way to turn the country around.”

“Drain the swamp! We’ve had enough of these politicians thinking they can get rich off the backs of the American people.”

“I listened to the Qanon report last night, and they were talking about Donald Trump’s strategy to drain the swamp and who they think will fall in the campaign.”

“It doesn’t matter who is in office. You’ll never drain the swamp. It’s the breeding ground of political evil.” 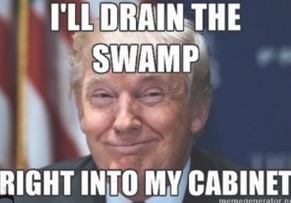 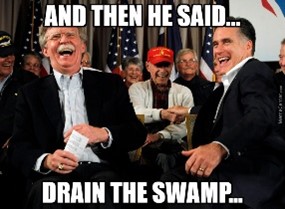 Many people think that the expression “drain the swamp” originates from the 44th president of the United States, Donald Trump. However, while Trump popularized the term in media, he did not invent it or coin it.

The origin refers to the practice of draining swamplands in areas where mosquito populations breed, reducing malaria outbreaks in the area. The politician, Winfield R. Gaylord, gets the credit for the first use of the saying in print.

Victor L. Berger, another politician, would also use it in his book, and Martin Longman. The web editor for the “Washington Monthly” used the expression in an article published online in 2019.

Trump likely got the slogan for his campaign from Ronald Reagan. Reagan used the expression in 1976 in his quest to gain the Republican nomination.

“Sometimes, when you are up to your elbows in alligators, it is hard to remember your original objective was to drain the swamp. I think we can drain the swamp. We can take on the Washington system. We can change from remote control to personal control of our lives.”

Phrases Similar to Drain the Swamp

Phrases Opposite to Drain the Swamp

The phrase has nothing to do with draining swamps—the swamp in Washington DC or any other corrupt government institution around the world. By draining the swamp, you remove the bad actors from the government structure.

Some people may use the phrase incorrectly, referring to removing certain people from Washington that they feel aren’t aligned with their political ideals. However, they wish to replace these individuals with other corrupt politicians more aligned with their objectives. Thus, you can never really drain the swamp.

You can use the phrase “drain the swamp” when you’re referring to removing corrupt government officials from office. Typically, people that use this saying are fans of the 44th president of the United States, Donald Trump.

It’s a common saying with his supporters and right-wing fringe groups like Qanon. Using the term around hard-left supporters would likely get them thinking that you’re a Trump supporter, and you would most likely end up in a verbal confrontation with them over politics.