Did a Russian friend say “dasvidaniya” to you when toasting your health? What does it mean? Is it a compliment or an insult? This post unpacks the meaning and origin of this expression.

The expression “dasvidaniya” comes from the Russian language. It’s a way of saying “goodbye” to someone, and it also acts as a toast when you’re drinking with friends or family. Dasvidaniya comprises two Russian words, “до (until)” and “свида́ния (meeting or date).”

So, the correct translation of “dasvidaniya” is “until we meet again.” Dasvidaniya acts as a formal and informal way to say farewell to someone. Technically, you’ll use it around people you don’t know and with people older than you. It’s a respectful farewell greeting and common in Russia.

However, “dasvidaniya” is not an informal farewell greeting, and Russian people don’t use it with their friends when saying goodbye. The phrase also acts as a toast, and you can use it in replacement for “cheers.”

“Well, my friend, it’s time for me to say dasvidaniya and leave your country. Thank you for the hospitality, and I look forward to seeing you in the future.”

“Dasvidaniya. It was good seeing you again. Let’s not leave it for another five years before we get together again. I miss chatting with you.”

“Oh well, it was a great evening, and I had a fantastic time. Thank you for everything. Dasvidaniya, I will see you next week at book club.”

“It’s time for me to say dasvidaniya and head home. This was a great evening out, and I’ll see you all at the office tomorrow.”

“Someone told me ‘dasvidaniya’ when I left the bar last night? What were they saying? I can;[t speak Russian. Were they insulting me?”

“Dasvidaniya Rick, it was a pleasure serving with you, but now it’s time for me to get back to my home country.”

“When you tell a Russian person ‘dasvidaniya,’ it means goodbye. You can also use it as a toast if you’re drinking with friends, even if they aren’t Russian.” 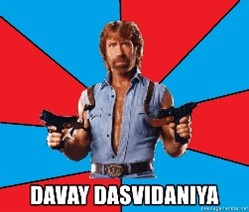 The expression “dasvidaniya” comes from the Russian language. Russia has a strange alphabet, and it might seem confusing to people from the west.

The correct spelling of dasvidaniya in Russian is “до свида́ния” pronounced “do svidánija,” from the root “до,” meaning “do,” or “till.” The saying “свида́ния (svidánija)” is a  genitive format of свида́ние (svidánije), meaning “meeting or seeing each other”).

The earliest entry of “dasvidaniya” into the Urban dictionary was in January 2017. However, it’s a common toast, and you probably hear it used in movies and TV series all the time.

Phrases Opposite to Dasvidaniya

Some people may use “dasvidaniya” to say ‘thank you.” While the phrase is technically two words, “Das” and “Vidaniya,” it means “goodbye,” not hello or thank you.

Using the word around anti-Russian people who don’t understand the term would be pointless and offensive.

You can use the phrase “dasvidaniya” when you want to say goodbye to someone or when you’re making a toast. Typically, it’s prudent to use the term when you’re around Russian-speaking people or people of Russian heritage.

However, “dasvidaniya” is a well-known greeting worldwide in many English-speaking countries. So, there’s a good chance the other person will understand what you mean with your toast, even if they don’t speak Russian.

You could use the phrase when toasting, and it’s similar to using other foreign words as a toast, such as “sláinte,” from the Irish language, Gaelic. You can toast when having a drink or when congratulating someone.