Are you looking for a way to express your relief at getting rid of something you don’t need or removing a person from your sight of life? If so, you could use the expression “good riddance” to describe their departure. This post unpacks the meaning and origin of this saying.

The meaning of the expression “good riddance” is to show your relief at removing someone or something from your life on a permanent or temporary basis.

For instance, you could tell your partner “good riddance” after they inform you the neighbors left your home after coming to complain about something.

Or, you could use it to describe throwing out an old couch and replacing it with a new one.

“Jim just left 5-minutes ago. Good riddance to bad rubbish; I’m so glad the boss fired that guy; he was a weirdo.”

“I’m so glad we’re finally getting around to throwing out this old bed. Good riddance to bad rubbish, we don’t have to worry about waking up with a bad back ever again.”

“Did you hear that the armed forces took out Osama Bin Ladin last night? Good riddance to bad rubbish.”

“So they decided to let you go? Well, good riddance to bad rubbish, I say. I hope you live in interesting times.” 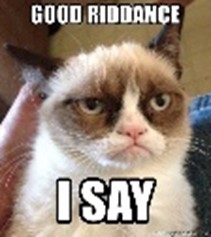 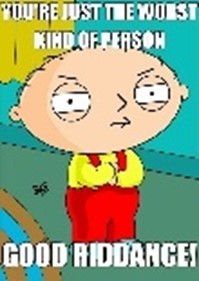 The origin of the saying “good riddance” comes from the playwright William Shakespeare. Shakespeare uses the expression in his 1606 play, “Troilus and Cressida.”

Thersites: “I will see you hanged, like clotpoles, ere I come any more to your tents: I will keep where there is wit stirring and leave the faction of fools.”

You probably hear people use the phrase from time to time, wording it as “good riddance to bad rubbish.” This version of the saying comes from Tobias Smollett. He used the expression in a comment in “The Critical Review” in 1805

“But we are sorry … to consider Mr. Pratt’s writings as ‘purely evil’… we should really look upon this author’s departure from the world of literature as a good riddance of bad rubbish.”

American journalist Francis Preston Blair, and member of President Andrew Jackson’s “Kitchen Cabinet,” published an editorial for The Extra Globe in 1841, where the phrase appears as follows.

“From the bottom of our hearts, we are disposed to exclaim “Good riddance to bad rubbish.”

Phrases Opposite to Good Riddance

Some people may use the phrase “good riddance” incorrectly. The expression defines the departure of something you don’t like from your presence or life. Therefore, using it to describe taking out the trash might be technically correct. Still, it’s not the proper usage of the saying.

You can use the phrase “good riddance” to express your relief at someone or something exiting your life. The term suits social and professional use, and its versatile. Suppose you’re using the phrase at work. In that case, you could say it after a problematic customer exits the building or the manager fires someone on the team you don’t like working with.