If you’re at church or around religious people and you need another saying to replace, “oh my God,” try using “heaven’s to Betsy!” instead. People will appreciate your restraint at blasphemy. This post unpacks everything you need to know about the meaning and origin of this expression.

If you were to experience a car accident that happened right in front of you in the street, you could use “heaven’s to Betsy!” to describe a feeling of shock and surprise.

“Heaven’s to Betsy! Did you see the shootout on the news? I have friends that work in that area, and I hope they are okay. I should probably call them right now to see if they were involved.”

“What do you mean you broke the dishwasher by overloading it? Heaven’s to Betsy. I knew this was going to happen when I saw you pack it last night.”

“Heavens to Betsy! I just won the lottery! Let’s go out to celebrate.”

“Did you hear about Joan’s son? He’s on trial for armed robbery. Heaven’s to Betsy, I don’t know what is wrong with that child, but he’s always breaking his mother’s heart.”

“Heaven’s to Betsy! Did you see that touchdown pass? Incredible!” 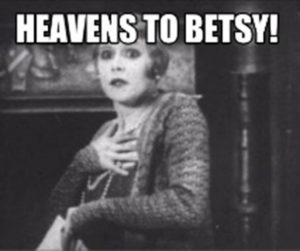 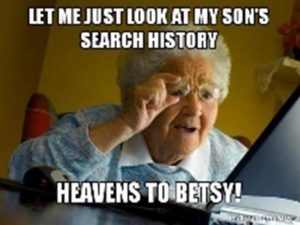 The origin of “heaven’s to Betsy!” comes from the late 19th century. However, no one knows when the phrase’s first use appeared in print or media. The term would gain popularity in the early 1900s as an alternative to blasphemy. Back in the early 1900s, people were religious before the separation of church and state.

As a result, the use of “heaven’s to Betsy” was a common replacement for the sinful, “Oh my God.” The phrase isn’t part of popular culture today, thanks to the continuing secularization of western culture.

“Heavens to Betsy! he exclaims…”

While there is no evidence to suggest it, many experts believe it was a subtle way of saying “Hell’s bells.” Experts believe it is a minced oath, and other variations for the phrase are “Heaven’s sake” and “Christ’s sake.” However, since these sayings were highly offensive at the time, the adaptation to “heaven’s to Betsy” was a more appropriate expression for use in public conversation.

Charles Earle Funk published the use of “Heavens to Betsy!” in his works, along with other saying in 1955. Funk stated that he could not find the origin of the saying, referring to it as “completely unsolvable.”

Phrases Similar to Heavens to Betsy

Phrases Opposite to Heavens to Betsy

Some people may use the phrase “heaven’s to Betsy” incorrectly. They may be referring to the late Betty White or another person they know who passed away. Some people may also use the incorrect name, substituting “Betty” for “Betsy.”

You can use the phrase “heavens to Betsy” when you’re trying to avoid using blasphemy around people that are religious or around seniors that might take offense to you using “oh my God.” The phrase is suitable for social and professional use. However, younger generations typically won’t use this phrase as it’s somewhat outdated, preferring to substitute it with another expression like “oh my gosh.”