Are you looking for a humble way to admit a mistake after someone corrects your error? You could say, “I stand corrected,” to accept defeat and move on with things. This post unpacks the meaning and origin of this expression.

The expression “I stand corrected” means that you accept responsibility for relaying erroneous information. It’s usually a reactionary statement made after saying something false, and someone corrects you.

The other person could be updating you in a conversation with them alone. Or they could be correcting you during a group discussion in front of others.

When you say “I stand corrected,” you are telling the other person that they are right, and you accept their correction. It’s a way of staying humble in defeat after someone tries to derail you from making a point or boosting your reputation when addressing a crowd. Instead of challenging the other person, you accept what they have to say and move on with whatever point you are making.

It’s common for people to use this phrase in professional communications when they make an error. It’s a phrase said among peers that respect one another. When you say “I stand corrected,” it means that the new information brought to light is correct, and you’re holding yourself accountable for relaying false or unverified information to others.

“I thought what I heard was the correct version, but I stand corrected. This for pointing that out to me.”

“I thought you were a one-hit-wonder as a salesperson, but I stand corrected. This month, you have the highest sales figures, and you’re doing well.”

“I stand corrected. The Mayans were not related to the Eskimos, and there is no real proof that the earth is flat.”

“Well then, I stand corrected, and I suppose you’re the brains of this operation now, right?”

“So, it’s impossible for someone to be wrong from time to time then? Well, I’m sorry, I stand corrected, and I’ll just keep my mouth shut from now on.”

“I’m feeling quite sheepish right now. I was certain that Arnold Schwarzenegger was in Rambo. But I stand corrected. It was Sylvester Stallone.”

“I assumed that we all had the training on the new CRM before I deleted the old server. I stand corrected. It looks like I did that prematurely.” 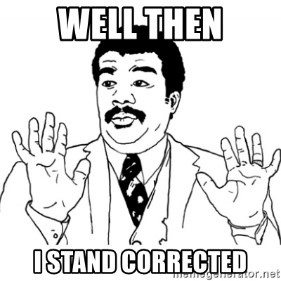 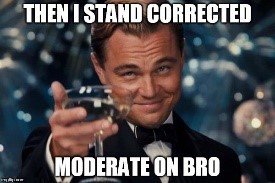 The expression “I stand corrected” originates from the 1600s. The saying held its original meaning over the last 400 years, with people using it to acknowledge their mistakes after someone puts them in their place.

There is no official record of the first appearance of the saying in writing. However, it remains a popular saying in modern language, and you probably hear it all the time.

Phrases Similar to I Stand Corrected

Phrases Opposite to I Stand Corrected

The phrase has nothing to do with telling people to stand in a correct posture. It means that you are mistaken and accept someone’s rebuttal of your claim. The “stand” in the phrase means that you change your position on what you previously thought was factual.

You can use the phrase “I stand corrected” when you want to admit to making a mistake after someone points out your error. It’s a way of taking ownership of making a mistake and assuming responsibility for it. It’s also a way of telling the other person that they are right and thanking them for correcting you.