Did you ask a friend a question online, and they start their reply with ‘IIRC‘? What does it mean? This post unpacks the meaning and origin of this acronym.

The acronym ‘IIRC’ stands for ‘If I can recall correctly’ or ‘if I remember correctly.’ IIRC means that you have a faint memory of something someone is asking you about, but you don’t know if your memory is accurate.

The phrase also has sarcastic use when you want to correct others. In most cases, people will use ‘IIRC’ even when they clearly recall the details requested. However, they tack the saying on at the end as emphasis that they do remember the information and they are accurate with their assumptions.

Some people use the term to ‘talk down’ to others, and it’s common to see this behavior in chatrooms and message boards like 4Chan and Reddit. When you use ‘IIRC’ in a sarcastic connotation, you’re letting the person know that you’re not the individual they’re looking for and need to find someone else.

“I think I know what you’re talking about regarding the project. I remember Tom was the last person to leave the bus that day, and I remember him carrying a large bag with something heavy in it.”

“I think Angela was in charge of that project, IIRC. I’m not sure, though. Go and ask Jim in HR. He’ll know who you’re looking for.”

“There was no way he was getting away. IIRC, the cops had him pinned down at both ends of the alley, and there was no escape possible.”

“IIRC, weren’t you responsible for bringing the kids to the event? So, that makes you accountable if anything happens to them under your care, right?”

“IIRC, John told you to do that, not me. Stop trying to pass the buck and take responsibility for your actions.”

“Where did I put that? IIRC, I left it in the garage, but I’m not sure if it’s still there or someone took it by mistake.”

“IIRC, it was the first place we went after the event. So, your wallet must be there. Let’s hope the cashier kept it.” 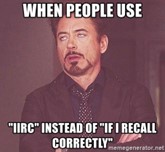 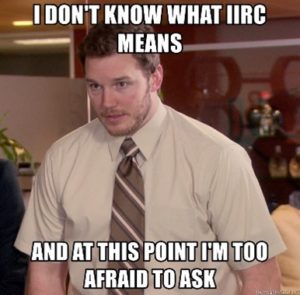 The acronym ‘IIRC’ is the evolution of the saying ‘I, if I recall correctly.’ Language experts cannot pinpoint when the full version entered the English lexicon. However, its acronym, ‘IIRC,’ appeared on the internet sometime in the 1990s.

Typing out the full version of the phrase is tiresome, especially if you’re using a mobile phone in the late 90s and early 2000s. The number keypad required users to press the key several times to land on the character they wanted.

As a result, people started making abbreviations and acronyms for commonly used phrases online. It’s similar to other acronyms like FWIW and TBH, where the users want to issue their opinion.

Phrases Opposite to IIRC

It’s common for people to use the entire saying ‘if I recall correctly in verbal exchanges. The acronym ‘IIRC’ is typically suitable for text communications and informal emails. Using ‘IIRC’ in an email to your boss would seem unprofessional.

You can use ‘IIRC’ in emails and text messages in social communications. You’ll use the acronym to show the other person that you might remember the details they need, but it’s been a while since you thought about it, and your memory might not be as accurate as you think.

You can use IIRC in text-based communications with friends and family when they ask you a question regarding specific details. It’s a way of telling someone that you think you can accurately recall the information, but you might be mistaken.