Are you talking to someone born between July 22 to August 22? If so, you’re talking to a ‘Leo.’ This post unpacks the meaning and origin of this star sign.

The term ‘Leo‘ describes a person born under the Leo star sign. Leo is a constellation, and it defines people of a specific character. Usually, Leos are kind-hearted people that are fiercely defensive of their family and friends. They have a good demeanor but can also be dangerous to cross.

The Urban Dictionary defines a ‘Leo‘ as ‘a kid that usually has brown-black hair, and has brown eyes.‘ He is also described as ‘the sweetest boy you will ever meet.’ Leo’s are well-known for being supportive of their family, friends, and partner.

A Leo will check in on you from time to time, and they like to keep up to date with events in people’s lives that they care about. Leo can refer to a man’s name or to anyone born under the star sign

“Are you a Leo? It seems like it to me. You have dark hair and blue eyes and are fiercely defensive of your family. I bet you’re born in August, right?”

“Dating a Leo is amazing. They’re kind and caring and will do whatever it takes to ensure you’re happy in the relationship.”

“A Leo is a friendly person. However, they usually display passive-aggressive behavior towards people they don’t like. My brother’s a Leo, and it defines his personality perfectly.”

“I know a Leo. He’s such a sweet boy and a kind and caring soul. However, don’t upset him, or you’ll likely end up in a heated argument.”

“Did you see Leo Di Caprio’s performance in ‘The Wolf of Wall Street?’ That guy played the role of Jordan Belfort perfectly. What a movie.”

“A Leo is a headstrong person, and they’re fun to be around. They love being the center of attention and want the spotlight on them at all times.”

“If you have a Leo in your life, you’re a lucky girl. They’ll always be faithful to you and die for you if it comes down to it.” 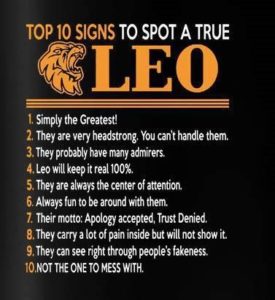 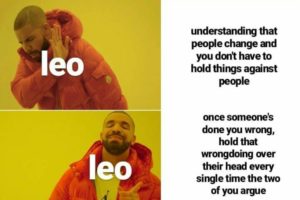 The expression ‘Leo’ originates from the star sign, Leo. Leo is one of the earliest star constellations recognized by the Mesopotamians as early as 4000 BCE. The Persians called it ‘Ser or Shir,’ and the Turks called it ‘Artan.” These words translate to ‘lion’ in English.

Some mythologists think the Sumerians referred to Leo as ‘Humbaba,’ a monster slain by the god Gilgamesh. The ancient Babylonians named the constellation ‘Great Lion,’ with the bright star, Regulus referred to as ‘the star that stands at the Lion’s breast.’ Regulus also went by the moniker, ‘The King Star.’

Phrases Opposite to Leo

The word ‘Leo’ is Latin for ‘lion.’ However, a Leo doesn’t describe a lion, it’s a term used to describe a boy or man, and those individuals born under the ‘Leo’ star sign, the fifth sign of the zodiac.

You can use the term ‘Leo’ to describe a person born under the Leo star sign. A Leo usually has a friendly temperament and is fiercely defensive of their family and friends. A Leo celebrates their birthday between July 23 and August 22. This ‘fire’ sign is outgoing and extroverted, and they love time in the spotlight.

Leo is also a boy’s name and sometimes a shortened form of ‘Leonard.’ You can use ‘Leo’ as a short version. According to the Urban Dictionary, a Leo is a ‘sweet boy’ that is respectful and courteous. They usually have black hair, blue eyes, and a passion for life.