Are you looking for a way to tell someone that you apologize for your behavior? If so, you could use the phrase, “mea culpa.” This post unpacks the meaning and origin of this phrase.

The meaning of the saying “mea culpa” is similar to the popular saying “my bad.” It serves as an admission of guilt and an apology. It’s a common term in Latin-American communities on the west coast and New York’s Italian neighborhoods.

The phrase means that you are sorry for your actions, and you apologize to the other person for the trouble caused. The term can apply to minor and major transgressions, from bumping someone to being involved in a car accident. “Culpa” translates to “culpable,” meaning responsible for the trouble. The “mea” refers to “me,” with you being the source of trouble.

“I’m sorry, I didn’t see you were walking there, mea culpa; I’ll be more careful.”

“Oh my gosh, that accident was totally all me, mea culpa, I’ll get my insurance card.”

“Ok, mom, I won’t do it again; I didn’t realize you would freak out so bad, mea culpa.”

“Wow, you guys are freaking out about nothing over here. Mea culpa, I’m sorry, what more do you want me to say?”

“Mea culpa, I’m still getting used to this standing on the right thing when I’m on an escalator. This city is crazy busy all the time.” 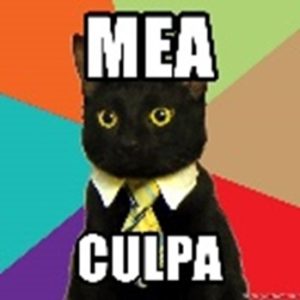 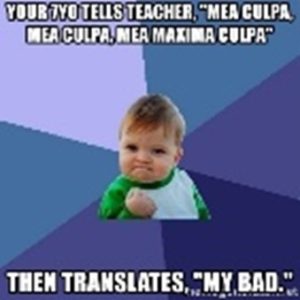 The origin of the phrase “mea culpa” comes from the “Confiteor” part of the Catholic Mass, where the churchgoers talk about their sins in the priest’s presence. After hearing their confession, the priest absolves them of their sins.

Therefore, the literal translation of the phrase “mea culpa” is “I confess.” The first appearance of it in print comes from the work of Chaucer in the 1300s. The term appears in his book, “Troylus,” in 1374.

People may sometimes extend the phrase to “mea maxima culpa,” meaning “my most grievous fault.” The first appearance of this variation is in Watson’s Decacordon, published in 1604, where it reads as follows.

“Shall lay their hands a little heavier on their hearts with Mea maxima culpa.”

As the years passed, the use of the phrase evolved to an apology and the more modern version of “my bad.” Today, you can use “mea culpa” when you’re trying to tell someone that the outcome of an event is your fault.

Phrases Opposite to Mea Culpa

Some people may think that “mea culpa” originates from Spanish. However, mea culpa is a Latin phrase and is common in Catholic mass celebrations. Therefore, since a large percentage of the Latin-American community is Catholic, it’s easy to see why this phrase ended up being popular among Latin-Americans as a way to express an apology and claim responsibility.

You can use the expression “mea culpa” as a substitute for expressions like “my bad” or “my fault.” The phrase suits use in anything from a minor bump into someone on the boardwalk to causing a car crash. The phrase originates from Latin used in the Catholic mass. Therefore, it’s common to confuse it with Spanish, as many Latin-Americans come from Catholic families. However, it’s fine for anyone to use the phrase, and a large percentage of people on both seaboards of the US use the term every day.