Did an old lady say “much obliged” to you after holding the door open for her when leaving the store? Why didn’t she just say “thanks” instead? This post unpacks the meaning and origin of this expression.

The expression “much obliged” is another way of saying “thank you very much.” Technically, the phrase means that you remain obliged to the other person, and if you’re ever in the position with the roles reversed, you will do the same for them.

This phrase is “old-fashioned” language. It’s a commonplace saying and usually said among the baby boomer generation. To be obliged to someone is to be in their debt, be thankful, grateful, or appreciative.

If you tell someone “much obliged,” you’re not really obligating yourself to do anything. You’re just adding emphasis to the act of thanking them for their assistance. “Much obliged” is an older-generation greeting, and it works well with most people over the age of 60.

“Thank you, dear sir, much obliged. It’s rare to find gentlemen like you in this town. It seems to me that you are a diamond amongst ruffians.”

“Much obliged, ma’am. If you could just point me in the direction of the nearest town, I would appreciate it greatly.”

“Much obliged to you for the help there, sir. Please take this money as a token of my appreciation. I insist; it’s the least I could do.”

“I would say much obliged to you, ma’am. You’ve been a tremendous help and source of support to my family throughout all of this.”

“Much obliged to you, sir. I appreciate you doing business with our firm, and you can continue to rely on us to deliver for you.”

Thanks and much obliged to you for those kind words, Cyril. I appreciate what you and your family had to do to help us out with this. I won’t forget it.” 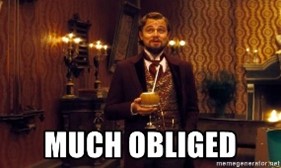 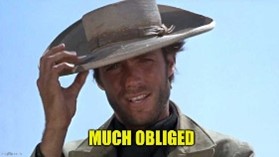 The French word “obliger” is similar, meaning to “obligate or commit oneself to a task” or “to make a promise.” The saying “much obliged first appeared in the 1560s, experiencing widespread adoption in English by the early 1600s to thank someone for their efforts or assistance.

The earliest use of the phrase in the Oxford Dictionary appears as follows.

“’Chron. Henry VII’ yf yt chaunce me by your ayde… to recover… I… shalbe so much obliged and bounde unto you.”

Phrases Similar to Much Obliged

Phrases Opposite to Much Obliged

The phrase “much obliged” doesn’t mean that you are obliged to do anything for anyone. It’s a way of thanking someone for doing something for you and that you would do the same for them if your roles were reversed.

Acceptable Ways to Phrase Much Obliged

However, it’s suitable for use by men and women, and it’s somewhat archaic language. You won’t hear it very often in millennial and Gen Z generations, but it’s a popular saying in the Baby Boomer generation. You could use it after someone opens a door for you or when a receptionist hands you your room keys at the hotel. It’s a diverse saying with plenty of applications.