Is someone chiming in on your statement or speech? You could ask them to save you the frustration and refrain from leaving their op-ed.

The expression ‘op-ed’ is an abbreviation of ‘opposite the editorial page.’ Typically, an op-ed in a newspaper reflects the opinions of the author or a group related to the article’s content. An op-ed is usually longer than a standard letter to the editor.

Most op-eds feature experts in the subject matter under discussion. The person usually has the qualifications and experience to write in an informative manner in the op-ed. It’s also common for PR firms to write op-eds in an attempt to forward their specific agenda.

An op-ed is published in a location on the page where it attracts attention from the reader. The traditional placement of the op-ed is next to the editorial. An op-ed is an opinion piece addressing popular issues or a response to another opinion expressed in another media publication or website.

“Listen, I know you’re just trying to help, but I don’t need your op-ed on the matter right now. Please, keep your opinions to yourself.”

“If I want your opinion, I’ll ask for it. Keep your op-ed to yourself and shut up. Why do you think you can just step into the conversation like that?”

“This op-ed piece is brilliant. This writer has real talent, and I hope the editor lets; they write a full column next week.’

“Op-eds are just people’s opinion pieces. They don’t mean anything; there’s nothing factual to gain from listening to someone’s biased opinion over the facts.”

“Did you read the op-ed piece in the NYT this evening? It was a masterclass the way the writer called out the overreach of the government’s authority.’

“There’s no way I’ll have the op-ed piece ready for press by 6pm. I don’t know what to do, and the editor is going to kill me when he finds out.” 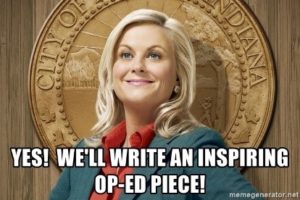 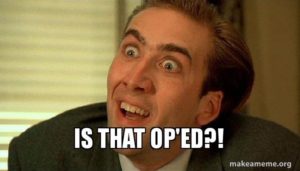 The expression ‘op-ed’ originates from the first ‘op-ed’ post created by Herbert Bayard Swope in 1921. Swope wrote the piece for The New York Evening World.

When Swope took the role of editor at the newspaper in 1920, he referred to the page opposite the editorial as ‘a catchall for book reviews, society boilerplate, and obituaries.’

Swope had the following to say about the op-ed piece.

“It occurred to me that nothing is more interesting than opinion when opinion is interesting, so I devised a method of cleaning off the page opposite the editorial, which became the most important in America … and thereon I decided to print opinions, ignoring facts.”

As a result, Swope developed his op-ed page in 1970, using it to include opinions from his employees. However, the first modern op-ed page appeared in the New York Times, penned by John B. Oakes on 21 September 1970.

Phrases Opposite to Op Ed

The phrase ‘op-ed’ refers to a short statement of option. Using it to describe a manifesto is incorrect. It’s more common for people to use the phrase to tell people they don’t want to hear their opinion.

You can use the expression ‘op-ed’ to describe an op-ed in a magazine or newspaper. However, the most common use of the term is in social and professional conversations where someone interjects with their opinion after someone makes a statement. You could use it at work after someone gives you a rundown of the new CRM system and you want to give your opinion.

Use it at home to describe how your kids chime in with their thoughts on where to take the family vacation after you make a suggestion. An ‘op-ed’ in terms of a conversation can have a negative or positive connotation. For instance, you could be grateful for the other person’s feedback or tell them it’s unwanted, and they should keep their opinions to themselves.