Are you a law student accused of a crime? You could waive your right to legal representation and handle your case ‘Pro Se.’ This post unpacks the meaning and origin of this expression.

The expression ‘Pro Se’ is a legal term. The word originates from the Latin term ‘Pro Se,’ meaning ‘on behalf of oneself’ or ‘for oneself.’ The term means you request the right to handle your defense yourself in a court of law.

The term can apply to civil and criminal cases, but it’s more common in criminal court. Small claims court doesn’t require the plaintiff or defendant to have a lawyer present, so you could say this is ‘Pro Se’ representation.

“The judge asked me if I want to waive my right to legal counsel and stand trial Pro Se. I have no idea what that means.’

“I can’t afford a lawyer, and the public defender is a kid out of college. I think I can better represent myself in court, Pro Se.”

“I am warning you, don’t take on your legal defense yourself. It might seem like a good idea to go Pro Se, but you’ll regret it, I promise.”

“I’m handling my case myself, Pro Se. I don’t trust the public defender and think I’ll take my chances without legal representation.” 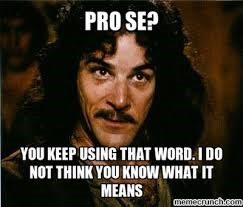 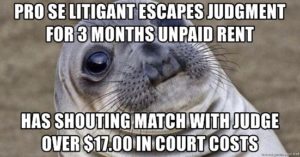 The expression ‘Pro Se’ is legalese originating from the late 1700s. In the case ‘Faretta v. California,’ the Supreme Court of the United States ruled:

Section 35 of the Judiciary Act of 1789, 1 Stat. 73, 92, enacted by the First Congress and signed by President Washington, states the following.

“In all the courts of the United States, the parties may plead and manage their own causes personally or by the assistance of counsel.”

“In the federal courts, the right of self-representation has been protected by statute since the beginnings of our Nation.”

The Court has the authority to determine if an individual is capable of representing themselves. The Court may examine the individual’s mental capacity and lucidity when making that decision.

Phrases Opposite to Pro Se

The phrase ‘Pro Se’ doesn’t have any meaning outside the legal industry. Using it to describe voiding legal representation in civil matters, interrogations, or interviews with the police is incorrect.

You can use the phrase ‘Pro Se’ in legal matters where you want to tell the court that you wish to represent yourself and waive the right to legal counsel. You can use this legal strategy if you can’t afford an attorney and feel the public defender isn’t competent enough to handle your case.

You can also use ‘Pro Se’ to describe legal proceedings in small claims court, where lawyers are not allowed. Typically, the phrase refers to criminal cases, not civil matters. So, you’ll use it in scenarios where the judge asks you if you’re waiving your right to legal counsel, choosing to represent yourself in court.