Are you looking for a way to tell someone that they are bringing up topics or subject matter best left alone? If so, you could use “open a can of worms” when referring to the issue or problem. This post unpacks the origin and meaning of this expression.

Most of the time, these problems or issues would go by in life without a second thought. However, some people may choose to dig them up to cause trouble for you or others in a situation. In that case, they are “opening a can of worms.” In most cases, you’ll wish the can would stay closed.

“Why did you have to go and open that can of worms? Now we’re going to have to deal with the investors sending us emails all week.”

“I asked her not to do it, but she did it anyway. She decided to open that can of worms, and now I’m really in for it with her mother and father. She should have left it alone.”

“So you decided to open that can of worms and make it difficult for everyone? Fine, if that’s how you want to play it, you can handle all the inquiries.”

“I don’t know why Tim has to bring this up all the time. It’s like he’s trying to open a can of worms and bury our relationship.”

“Don’t open that can of worms, Larry. It will do nothing but make everyone upset and on edge.”

“There’s no need to open that can of worms around us. We don’t want to hear about it right now.”

“That was the wrong thing to do, I told you to leave it alone. Now you’re gone and opened a can of worms and things are never going to be the same.” 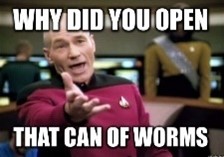 The origin of the expression “open a can of worms” comes from the 1950s. The saying appears in an article published by the Edwardsville Intelligencer in November, 1951.

“The question of command for Middle East defense against Soviet Aggression is still regarded as ‘a can of worms’ at General Elsenhower’s SHAPE headquarters here.”

The phrase is a writing cliché, but it also receives plenty of use in verbal communications to this day.

Phrases Similar to Open a Can of Worms

Phrases Opposite to Open a Can of Worms

Ways People May Say Open a Can of Worms Incorrectly

The phrase has nothing to do with worms in a can. The can in the saying refers to a hidden problem, and the worms are the problem coming alive after someone brings them up. Using the phrase to describe visible problems or issues is incorrect.

Acceptable Ways to Phrase Open a Can of Worms

You can use the expression, “open a can of worms,” when you’re trying to tell someone that what they are doing or saying will only make matters worse.

It’s a way of telling someone that they should have let things be instead of creating a deeper issue out of a trivial problem. It’s also useful for giving people a subtle warning that things might get worse for them if they continue on this path.

The phrase suits social and professional use. You can use it at work to tell a colleague not to dig deeper into something. Or you can use it at home to tell your partner that they are making life difficult for you.