Are you reading through your employment contract? Do you know what the term ‘per diem’ means? This post unpacks the meaning and origin of this expression.

The expression ‘per diem’ is a noun. It refers to an amount of money paid to your by an employer to cover your daily expenses when working on their behalf. For instance, if your company sends you to a foreign country on a contract, they may pay you a daily stipend in local currency or dollars to cover those expenses you incur while away from work.

‘Per diem’ can also refer to ‘by the day.’ This use of the expression is usually found in contract law, describing conditions of employment or payment. For instance, you could employ someone on a day-to-day basis and pay them on a day-to-day (per diem) basis.

‘Per diem’ describes a single day, not a week or month. It’s not common to hear the phrase outside professional communications or contract law.

“We’re willing to hire you on a ‘per diem’ basis. We’re not looking for permanent employees right now. We’ll discuss that after the recession ends.”

“We only hire people on a ‘per diem’ basis. We’re not interested in the pain of hiring full-time employees who depend on the company for everything.”

“The company pays me daily expenses on a ‘per diem’ basis. I get $100 per day just to cover things like buying food and my entertainment.”

“Most of the guys that get paid ‘per diem’ stipends on contracts just use it for beer money. There’s a huge problem with alcoholism in contract work offshore.”

“I mean, what would you do if you got $100 a day to do whatever you want? Most of the guys just drink their lives away in the bar.”

“We’ll have to consider a ‘per diem’ employment position for you. I can’t afford to take on any full-time employees at the moment, but I don’t want to lose your skills.”

“Are you going to pay me ‘per diem,’ or am I getting a salary? The employment contract isn’t clear, and I want to confirm that with you.”

“The boss told me he’s paying me per diem for my daily expenses. That means I get free beer money every day I’m on the contract. This is my dream job.” 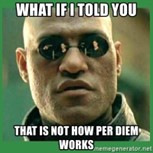 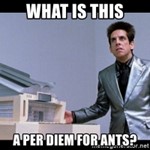 The expression ‘per diem’ dates back to the early 19th century. However, the term’s adjective goes back to the mid-1700s. The phrase kept its meaning over the centuries and is still in use in contract law and business.

Language experts cannot pinpoint when the term entered the English lexicon or who coined its first use. However, the early use of the saying referred to paying someone a stipend for their loyalty. It was a daily fee owed to the employee of a business.

Phrases Similar to Per Diem

Phrases Opposite to Per Diem

Some people may confuse ‘per diem’ with the more famous saying ‘carpe diem.’ However, the two are not related and have different meanings. Using ‘per diem’ to describe ‘seize the day’ is incorrect.

Acceptable Ways to Phrase Per Diem

You can use ‘per diem’ when describing an amount of money allotted to you in a specific daily schedule. It’s similar to giving kids lunch money or receiving a daily stipend from an employer on a contract job. While the phrase can refer to a daily wage, it usually refers to a sum of money paid by the company to cover an employee’s expenses.