Are you looking at a heavily-set woman? You could call her a ‘puff mama’ to describe her obese physiology. This post unpacks the meaning and origin of this expression.

A ‘puff mama’ is used to describe a large, heavily-set woman. The original definition of the term in the Urban Dictionary is a ‘really honcho woman,’ meaning a hefty, heavy woman that is morbidly obese. She has a BMI over 30, being severely overweight.

The woman can still move around on her own accord but is close to immobility due to her weight and size. The Urban Dictionary also defines ‘puff mama’ as a woman ‘who shakes the ground she walks upon. She brings seismic tremors to the peoples of the world when she does jumping jacks.’

A puff mama may get her name from being out of breath after doing a simple activity, such as walking back to the lounge from the bathroom. Her weight means she has very poor cardiovascular fitness, resulting in shortness of breath after walking or climbing stairs.

“Did you see the size of that woman? She’s a real puff mamma. You can see she’s struggling just walking around. It’s like looking at a heart attack with legs.”

“Simons’s mom is a real puff mamma. Whenever we go over there for dinner, his mom makes a feast and then eats most of it.”

“That girl is huge. She’s a real puff mamma. I wonder if she’s ever thought about going on a diet or exercising a bit?”

“This woman is a puff mamma. Look at how she’s struggling to catch her breath after walking across the hallway. It’s a terrible way to have to live.”

“A puff mamma is a woman that is morbidly obese and has no intention of changing her physique. You’ll know you see one when you notice they can’t catch their breath after doing simple chores.”

“I’m tired of being a puff mamma. I need to get on a diet and lose this weight for my health and my family’s sake.”

“The girl at the cash desk is a puff mamma for sure. Did you see how fat she is? She’s as big as a house. I bet the floor shales when she walks to the bathroom.” 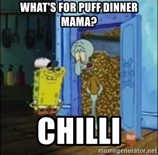 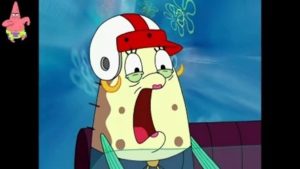 The definition of ‘puff mamma’ appeared in the Urban dictionary in December 2008. Puff Mama is not a common expression, and its relevance is fading as the legacy of Spongebob Squarepants declines in cultural media.

Phrases Opposite to Puff Mama

You can use the expression ‘puff Mama’ to describe a heavy-set woman that shakes the earth as she enters the room. A puff mama is a large woman, and her lack of fitness combined with her huge bodyweight means she ‘puffs’ when she sits down, attempting to catch her breath.

You can use the expression in social situations where yore refers to a large woman. The woman could be moving or sitting in place. Typically, these women are morbidly obese, and many of them will get around in ‘rascals’ to help them avoid the exercise associated with walking and the damage it may cause their bodies.

You can also use ‘puff mama’ when discussing the character from the Spongebob Squarepants TV show.