Did one of your friends just point at a heavy-set woman and call her a “Heffer?” What does the word mean? This post unpacks the meaning and origin of this expression.

The expression “Heffer” also goes by the spelling “Heffa.” The word is a derogatory expression referring to large women with a high Body Mass Index (BMI). Typically, the woman will have a BMI in the obese range, over a reading of 30 on the scale.

The saying can also refer to a young woman on the verge of obesity due to her poor lifestyle habits and dietary choices. Men are the primary users of the term, and they use it to describe women they find fat and repulsive.

Heffer is a form of body shaming, and it’s no longer acceptable to use the expression online on platforms like Twitter. Doing so could land you in trouble with the “woke” mob.

“Look at that fattie over there by the bar. Man, she must weigh 300 pounds. What a Heffer. I bet you’re into that thing, right, Mike?”

“Samantha got mad at me after insulting me, and I called her a Heffer. She burst into tears and asked me how I could be so cruel to her. I feel kind of bad about it.”

“Whoever said marriage is bliss didn’t have to marry a Heffer. After we married, my wife got so fat that I can’t stand to look at her anymore.”

“That girl over there is a proper Heffer. She has the biggest muffin top I’ve ever seen, and man, look at those cankles.”

“Once you go with a Heffer, you never go back. I suppose some guys are into that sort of thing. It takes all kinds.”

“Heffers are the best. They are so eager to please you, and you can get them to do anything you want in bed.” 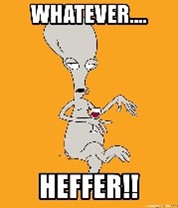 The expression “Heffer” originates from the word “heifer,” a term for a female cow that’s not yet pregnant. Since some people in society choose to call fat women “cows,” “Heffer” is another synonym for an overweight woman.

Men were using the term “Heifer” to describe overweight women as far back as 1835. However, the word changed to “Heffer” sometime in the early 2000s. There are some instances of the word being spelled as “Heffa.”

The first appearance of the spelling “Heffer,” appeared in the Urban Dictionary in 2003. A user, “Jimbob,” uploaded the definition to the platform. Since it has become the subject of many internet memes of fat women.

However, during the late 2010s, the “body positive” movement would label the use of the word “Heffer” as hate speech and body shaming toward fat people. As a result, people using the term online experienced backlash, and it’s not used as much as it was a decade ago.

Phrases Opposite to Heffer

Some people may use the word to describe a woman that isn’t morbidly obese, or they may confuse the word with the Spanish term “Hefe,” referring to a “boss” or “master.” It’s also an offensive term to people, so calling a large woman a “Heffer” to her face would likely upset her.

You can use the expression “Heffer” when referring to a heavy-set woman. It’s a derogatory saying, so many people will find it offensive. People who use the phrase online do so when bullying large women on message boards or making fun of images or videos of large women.

The phrase is only suitable for social use. People would likely use it when talking about a large woman with their friends and mocking her behind her back. Using the term online could have people accuse you of bullying, depending on the context of its use in the conversation.