Did your boss just ask you to “pull out all the stops” on your project? What do they mean? This post unpacks everything you need to know about this idiomatic expression’s origin, meaning, and use.

To “pull out all the stops” can refer to various tasks at work or home, and it’s a great way to instill other people’s confidence in choosing you for the job. Using the phrase tells the other person that you’re committed to seeing it through, and you’ll dedicate your time and effort to the task.

“I know that I don’t have much time left to get to the airport before the flight leaves, but I’m pulling out all the stops to get there on time.”

“We’re only $10,000 from target this month. Let’s pull out all the stops to make sure we meet our monthly budget and get our bonus.”

“We’re relying on you to do the job Mike, don’t let us down. I want you to pull out all the stops to make it happen for the team.”

“I’ll pull out all the stops to make sure I give Kim the best birthday party ever this year.” 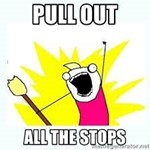 The first reference of “stops” relates to the pipe organ. Matthew Arnold wrote “Essays in Criticism” in 1865, and the phrase appears as follows.

“Knowing how unpopular a task one is undertaking when one tries to pull out a few more stops in that… somewhat narrow-toned organ, the modern Englishman.”

The pipe organ consists of several components, including the stops. The organ player will have to regulate the music through the keyboard and pedalboard and by “pulling out the stops” on the organ. Older organ models feature the stops as knobs controlling pneumatic pipes.

When you close the stop on the organ, it mutes the sound of the pipe. Opening the stop allows the sound to swell. If you “pull out all the stops” on the organ, you’re letting all the pipes open up to their maximum capacity, producing the loudest sound and performance from the instrument.

So, the phrase would feature in everyday conversation to tell people you were applying maximum effort to a situation or task.

Phrases Similar to Pull Out All the Stops

Phrases Opposite to Pull Out All the Stops

Ways People May Say Pull Out All the Stops Incorrectly

Some people may use the phrase literally instead of its idiomatic, symbolic meaning. You’re not actually pulling up anything with the phrase. So, using it to describe pulling something from the ground is the incorrect use of the phrase.

Acceptable Ways to Phrase Pull Out All the Stops

You can use “pull out all the stops” in professional and social situations where you’re trying to tell someone or a group that you’ll give them your best effort. You could apply the saying at work when your boss asks you to do a task, or you could use it with your friends when they ask you to commit to attending a party, telling them you’ll pull out all the stops to make sure you’re there.