Did someone just call you a “flash in a pan” at work? What do they mean? This post unpacks everything you need to know about this idiomatic expression’s origin, meaning, and use.

The idiomatic expression “a flash in the pan” can refer to people, objects, or devices. The saying refers to a waning performance after an impressive debut.

If you’re calling someone a flash in the pan, you’re saying that they aren’t living up to your expectations after they made a good first impression.

A “flash in a pan” is something of a disappointing statement. However, it leaves it open for the person or object to improve their performance before making your final decision about their value to you.

Joe: “Oh, it looks like Cody Garbrandt takes another loss; he never managed to put anything together after losing the title to TJ Dillashaw.

Daniel: “You’re right Joe, it looks like he was just a flash in the pan, not a real champion.”

Manager: “Tom, I need you to focus on your sales technique. You did outstanding numbers last month, but you’re lagging behind quite a bit this month. I hope you’re not just a flash in a pan.

Salesperson: “I’ll do better boss, just give me to the end of the month, and I’ll pull the figures right.”

Kim: “Do you remember that artist? She was so good; I miss her music.”

Sandra: “Yeah, it turns out she was just a flash in a pan.” 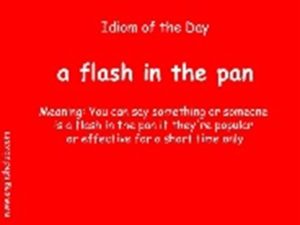 There are several explanations for the origin of “flash in a pan.” Many experts believe the phrase’s first use comes from the Gold Rush days in California during the mid-19th century.

Gold prospectors panning for the yellow metal in rivers would see a glint of gold in the pan, fooling them into thinking they found a deposit. However, after much effort, it would turn out that it was nothing more than “a flash in the pan.”

The phrase also ties into the origin of another idiomatic expression, “it didn’t pan out.” This phrase means that the prospectors didn’t manage to recover any gold in their pans that day. While many language experts believe that the gold prospecting days are the origin of the phrase, others have a different explanation for the roots of the phrase.

Some people believe the phrase originates from the 17th century and the use of the flintlock musket. If the musket fired without expelling the projectile, the shooter would call it a “flash in a pan.”

Mr. Dryden’s play from 1687 features the use of the phrase as follows.

“If Cannons were so well bred in his Metaphor as only to flash in the pan, I dare lay an even wager that Mr. Dryden durst venture to Sea.”

Phrases Similar to Flash in a Pan

Phrases Opposite to Flash in a Pan

Ways People May Say Flash in a Pan Incorrectly

Some people may use a flash in the pan in the literal sense of the phrase. This idiom surrounds a person’s inability to hit their previous performance highs. As a result, it has nothing to do with cooking or the culinary world.

Acceptable Ways to Phrase Flash in a Pan