Did someone just tell you something that doesn’t make sense? They might have left critical facts out of what they were trying to explain. If that’s the case, you could always cut them off and say “purple monkey dishwasher.”

This post unpacks everything you need to know about the origin and meaning of this idiomatic phrase.

The meaning of purple monkey dishwasher refers to how information distorts its original context and meaning after traveling from person to person. If enough people pass the information to others, especially complex information, it often comes out with no discernable meaning when it returns to the original person.

There is a famous experiment where a group of school children lined up and whispered a word into each other’s ear, passing it down the line. By the time the last child received the word, it was totally different and not the first child’s original word. The exercise shows us the power of obtaining accurate information and how it corrupts the further it gets from its source.

So, people will use “purple monkey dishwasher” to describe a situation where they think you do not have the right information.

For instance, you could be relaying something you saw on the news to someone. During your interpretation of the report, you forget some of the details, and your friend halts you in mid-sentence saying, “purple monkey dishwasher.” The use of the phrase shows you that you’re not making sense, and they should probably just watch the news for themselves or look up a report about the situation online.

This use of the idiom can also refer to things like Fake News and other conspiracies where you want to tell the person that they need to review their facts and check the information before they start spreading untruths or rumors.

John: “So I heard there are these thirteen powerful families in the Illuminati that secretly control the world.”

Franny: “But Craig told me that the teacher said that….” 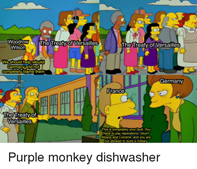 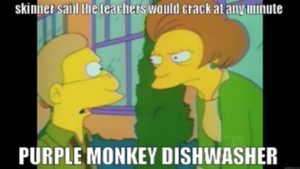 This strange idiom originates from the legendary TV show, The Simpsons. In one of the episodes, Bart tells a secret to someone, and they repeat it through dozens of people. By the time Bart receives the message back, it has a distorted meaning, and the end of the secret features the words, “purple monkey dishwasher.”

If someone tells you a crazy rumor or a story that’s hard to believe, then you can reply with “purple monkey dishwasher” to express your disbelief at something. It’s also a suitable reply to someone you suspect of telling you fake news.

Phrases Opposite to Purple Monkey Dishwasher

Some people may incorrectly use the phrase purple monkey dishwasher to call someone out on their nonsense. While this might seem like a practical use for the phrase, it’s incorrect, and “Stugots” would be a better choice of a slang word for that situation.