Did your friend just tell you he’s on the way to pick you up? You could reply with ‘rad’ to voice your excitement.

The expression ‘rad’ is an old surfer and skater slang, and it means ‘cool’ or ‘dope.’ It’s an old expression used by Gen Xers and popularized by the surfing and skating community.

It’s one of the oldest slang words in its genre and is still in use today by top influencers in the board riding community.

‘Rad’ is a shortened version of ‘radical,’ and it’s the more popular version of the saying. Typically, it’s only used by youth who are into board-riding sports.

“That’s rad, dude. I’m happy for you. It’s always good to see someone having fun in the water. There’s nothing like getting some time in the green room, for sure.”

“That air was rad. You must have got at least three feet above the lip and landed it so clean.”

“Kelly slater is so rad. He’s fifty, and he rides like he’s in his twenties. That guy is the GOAT for sure, and he’s still competing on the world tour.”

“This place is rad. I haven’t seen an indoor skatepark in ages. They have everything here. I think I’m going to hit the vert ramp first.” 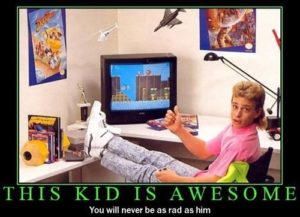 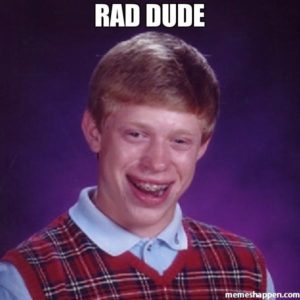 The expression ‘rad’ originates from the 1980s. It’s a word used by people who grew up in ‘Generation X.’ Gen Xers are people born from 1962 to 1982, and they were the Generation to invent skateboarding and snowboarding, taking board riding sports to a new level.

The term was popular in the United States. It appeared in cult-classic skateboarding movies from the 80s and 90s, including ‘Gleaming the Cube’ and ‘Thrasher.’ The term carried itself into the 1990s, thanks to the popularity of the kid’s animated TV show ‘The Teenage Mutant Ninja Turtles.”

‘Michelangelo’ was credited with reviving 80s-style surfer and skater slang during the episodes, using terms like ‘rad’ and ‘gnarly’ while introducing his legendary catchphrase ‘cowabunga.’

Phrases Opposite to Rad

The phrase ‘rad’ has a scientific meaning referring to units of radiation, or ‘rads.’ However, the use of ‘rad’ in social conversations only applies to things you like and find ‘cool.’ Using it for scientific purposes is fine, but it’s not the common use of the expression.

You can use the expression ‘rad’ to replace other terms like ‘cool’ and ‘dope’ in conversations. Like the other examples, it’s slang and only suits social interactions. Most adults grow out of using these terms, but they’re very popular with kids, teens, and people in their twenties. ‘Rad’ is an 80s term, and using it might make you appear ‘retro’ to your friends.

The expression ‘rad’ is outdated, but it’s making a comeback in the 2020s. Many influencers in the board riding space, like Jamie O’Brien, use the term in their video content online. It’s originally surfing, snowboarding, and skateboarding slang and is popular with people who enjoy a board riding lifestyle.