Are you looking for a way to blow someone off for the evening? You could tell them you’ll take a raincheck on your plans. This post unpacks the meaning and origin of this expression.

The expression ‘raincheck’ means declining an offer, deferring it to a later date. It can also mean you’re postponing an activity to a later date due to extenuating circumstances changing your plans.

It’s a polite way of excusing yourself from an event, promising that you’ll catch up with the person later. ‘Raincheck‘ means you can’t accept an invitation right now, but you’ll do it later.

‘Yeah, I’m going to have to take a raincheck on that. Something came up this evening, and I have to divert all my attention to it. Sorry, we’ll do it sometime soon.”

“I was supposed to take the kids to Disneyland this weekend. However, we’ll have to take a raincheck on that. Something came up at work, and I must spend Saturday finishing a project.”

“Can we get a raincheck on dinner tonight? I’m sorry to do this to you, but my brother just called me, and he has an emergency I have to help him with this evening.”

“Let’s take a raincheck on that. I know you wanted to go to this restaurant for ages, but waiting one more day won’t matter, will it?” 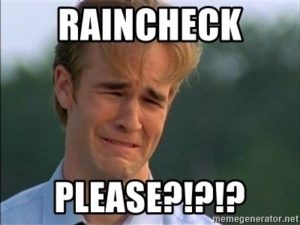 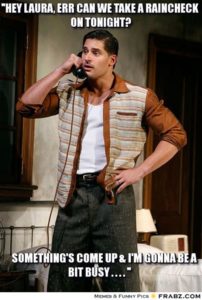 The expression ‘raincheck’ originates from the sport of baseball. The first use of the term in the sport appears in the 1870s. If people attended a baseball game and paid for their ticket, they would receive a ‘raincheck’ if the game was called off due to precipitation.

The spectator would receive a free ticket to attend any game of their choosing later in the season. The phrase also spread to the retail industry, where stores would use ‘raincheck.’ If the store advertised products at a specific price, and consumers visited the store to find them out of inventory, they received a raincheck.

The raincheck entitled them to receive the same product at a discounted price when the store received new inventory from their suppliers. The ‘raincheck’ was a paper voucher and a method for retailers to retain customers’ business rather than have them visit a competitor for the same product.

The ‘raincheck’ was standard retail practice after 1989. The Federal Trade Commission (FTC) created the ‘unavailability rule,’ entitling consumers to rainchecks. Over the following decade, the term changed to something avoided or procrastinated on.

Phrases Opposite to Raincheck

The phrase ‘raincheck’ has nothing to do with the rain or checks. While the original use of the term was for refunding people attending baseball games, this use of the expression no longer applies to its meaning.

You can use the term ‘raincheck’ when you want to brush someone off to a later date. The phrase can have malicious or coincidental intent, depending on what you’re rainchecking. For instance, if a girl you don’t want around calls you and asks you out on a date, you could tell them you’ll take a rain check to avoid seeing them.

Or you could tell your folks you’ll take a rain check on visiting them for dinner. A raincheck is an excuse you use when you have something more important to do or you just don’t feel like seeing that person. If you use raincheck, it means that you’re going to reschedule for a later date, but there’s no need to make plans right now.